This set of images were taken on a spring school holiday trip with my nephew. Around Ruapehu is a somewhat bigger project than around Taranaki, with its exposed conditions and large wide open spaces. 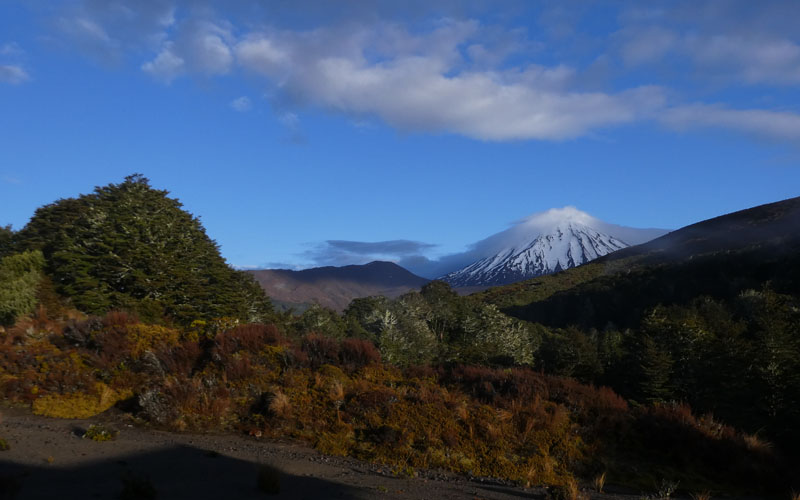 Ngauruhoe as usual captures the attention soon after our arrival at Waihohono in from the desert road. 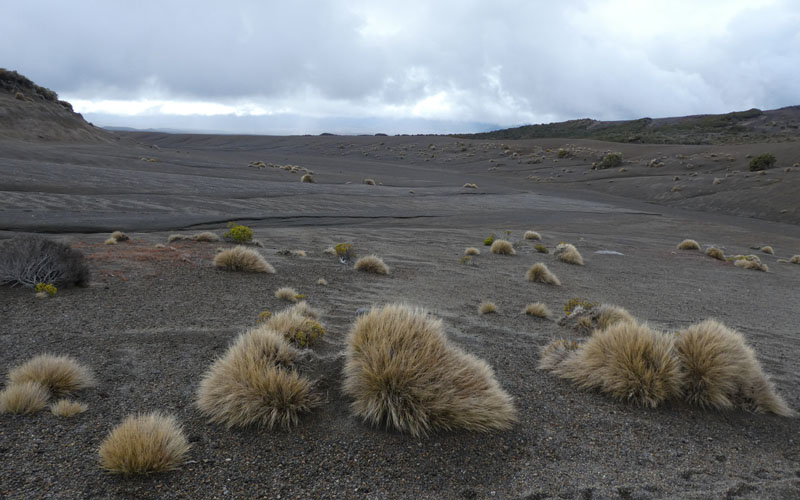 We set off early each day, and the first day is south through the Rangipo desert environment. Its a cold desert, and much drier then the west side because of the rain shadow. Not much grows there. 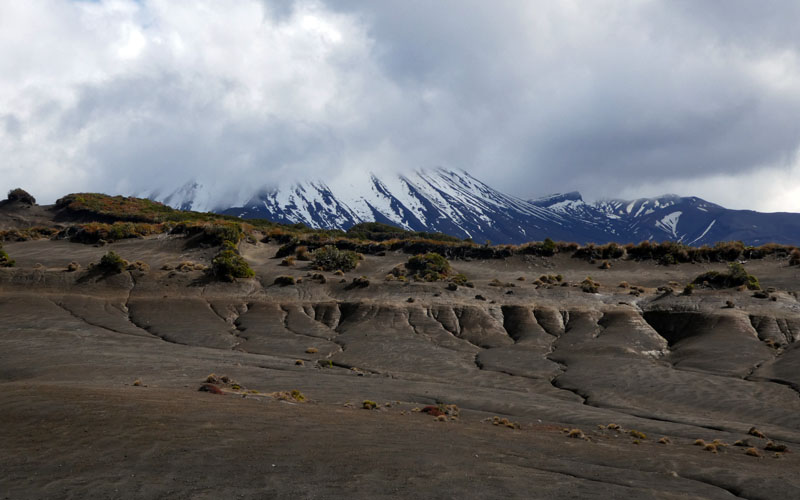 The days trail is pretty much a dry river bed, then into large open valleys. 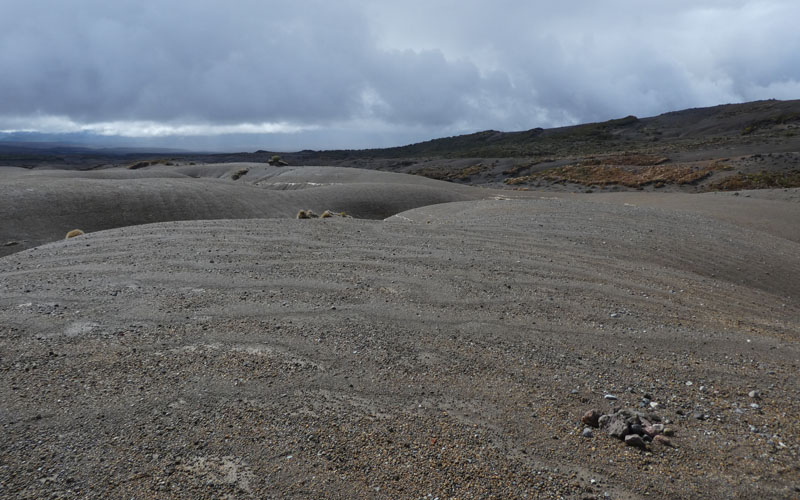 The expansive views are nice, but can be a little alarming, as the walk ahead is sometimes visible a good hour or more before hand. You just have to walk one step at a time. 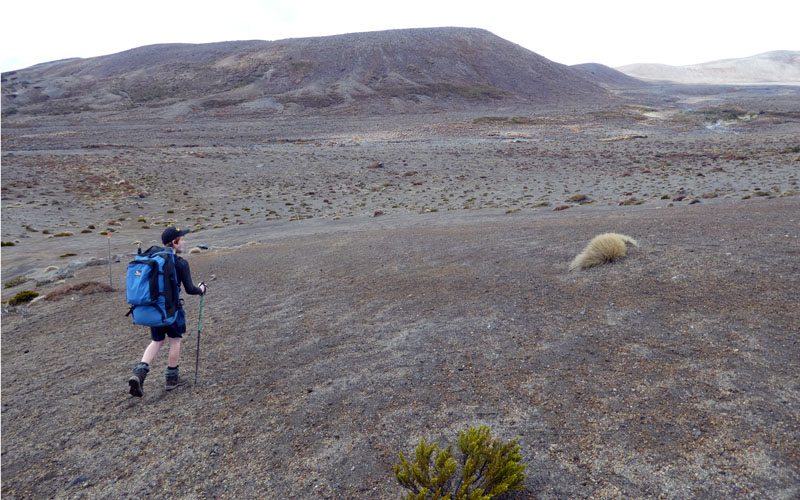 We are fresh, and make good progress even with heavy packs. The weather just holding for now. 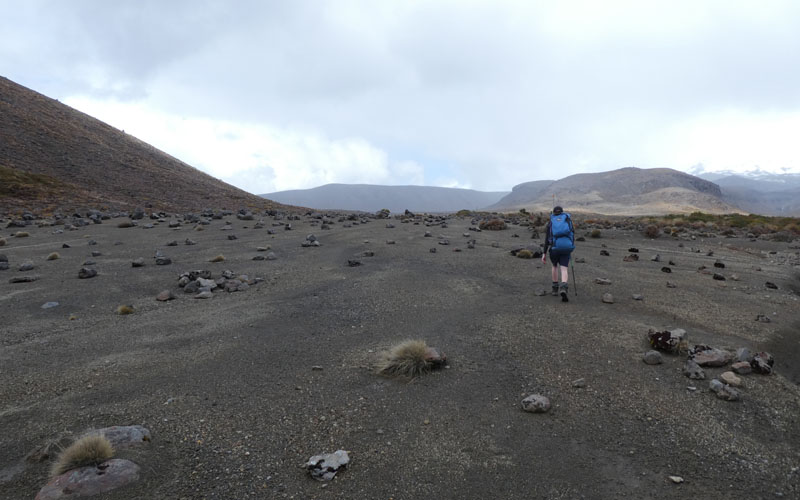 There is a bridge at the river crossing, and it turns out pretty much all the streams are bridged, except one, right at the end. 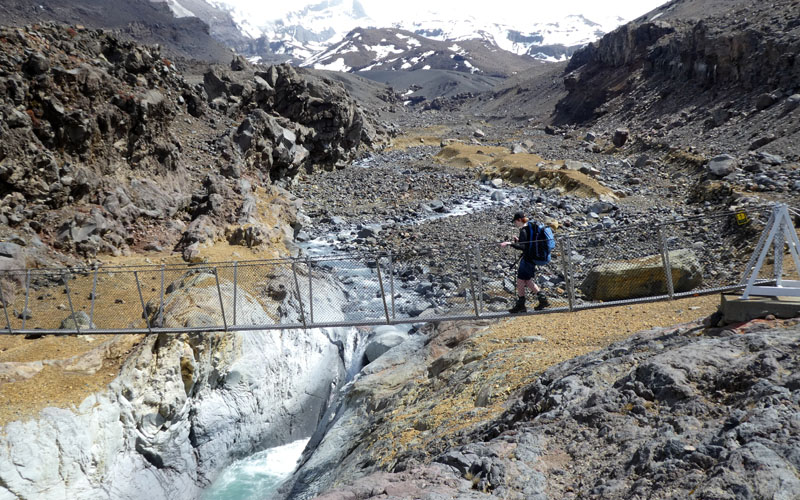 Sometime later we have to cross the Whangaehu gorge, which is known lahar path. A sign reminds us that the bridge was last washed away in 1999. Its a sturdy looking swing bridge, and I lose count at 5 such swing bridges on the circuit. 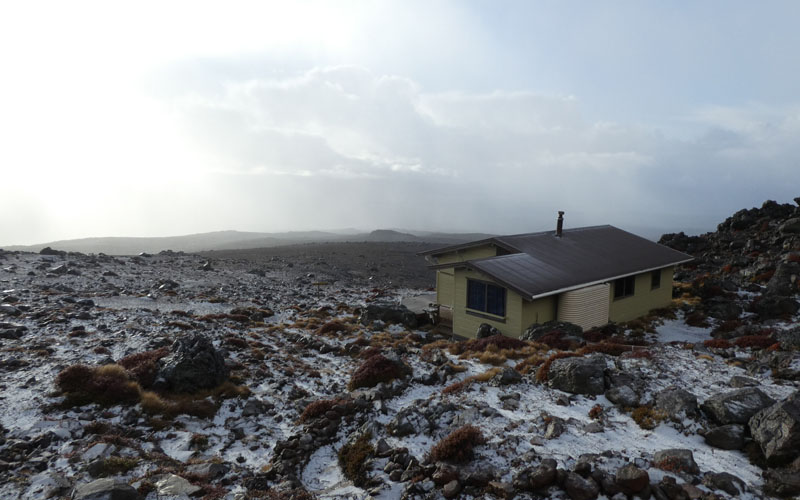 We have a late lunch on the Rangipo Hut deck. The cloud is setting in the forecast is for rain tomorow. We awake to sleet, snow and misty drizzle. The day is challenging ( that would have made a better hut day) on this second leg through to Mangaehuehu. Four and half hours in the cold wet and wind. We stop to put more layers on, and have a quick snack but pretty much its just a case of keeping moving. 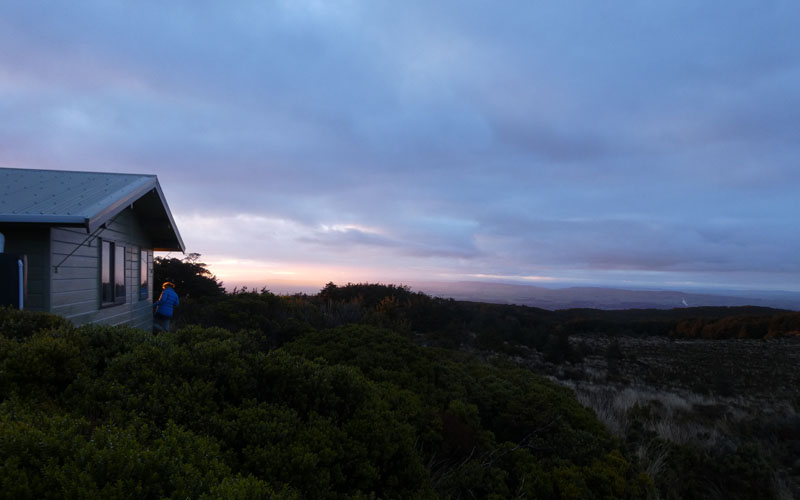 At Mangaehuehu we meet Roma, a lone tramper headed around the hill in the other direction, and a token sunset as the weather slowly eases. 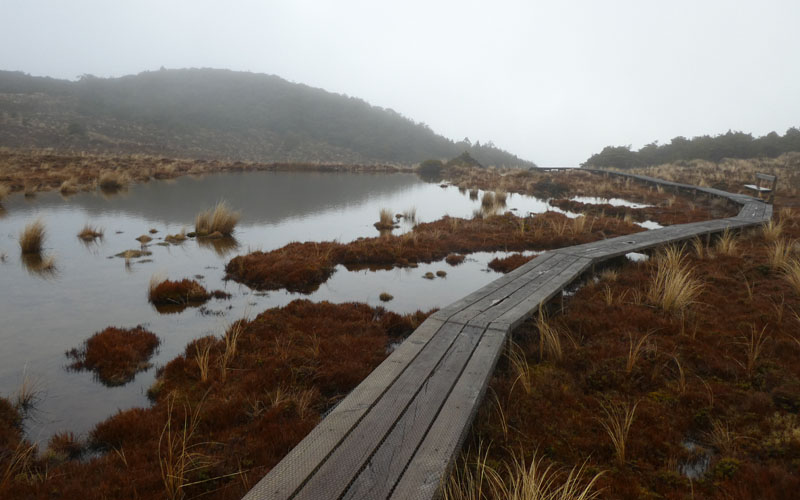 The third day is the easiest, and the terain changes from tussolk to forest breifly then back on to the alpine tops. There are a number of pretty alpine lakes and tarns on this leg. 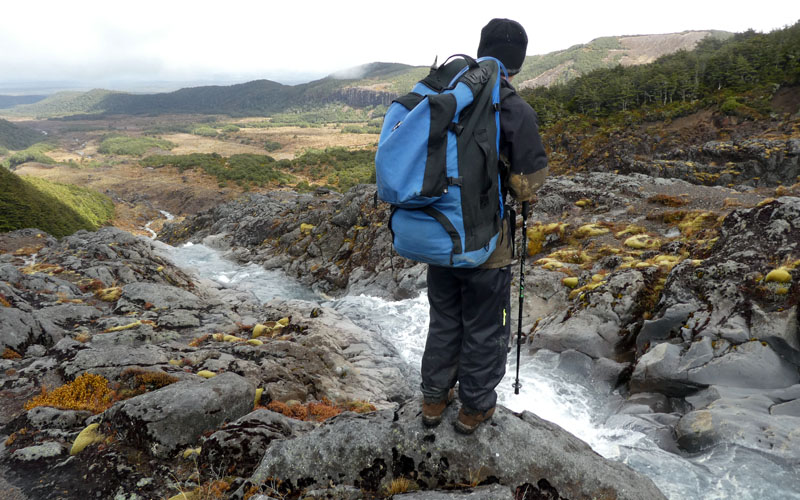 To get to the next hut, Mangaturuturu we have to descend the cascade face, which is at times steep and bare. 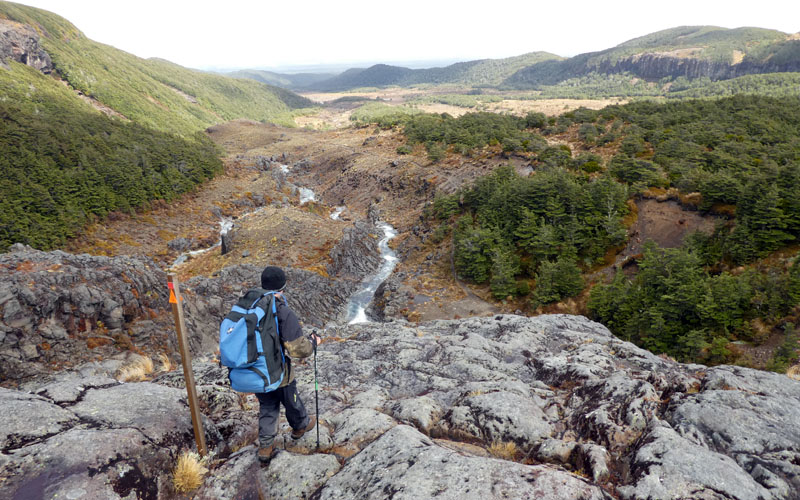 The younger member of our party doesnt even blink. 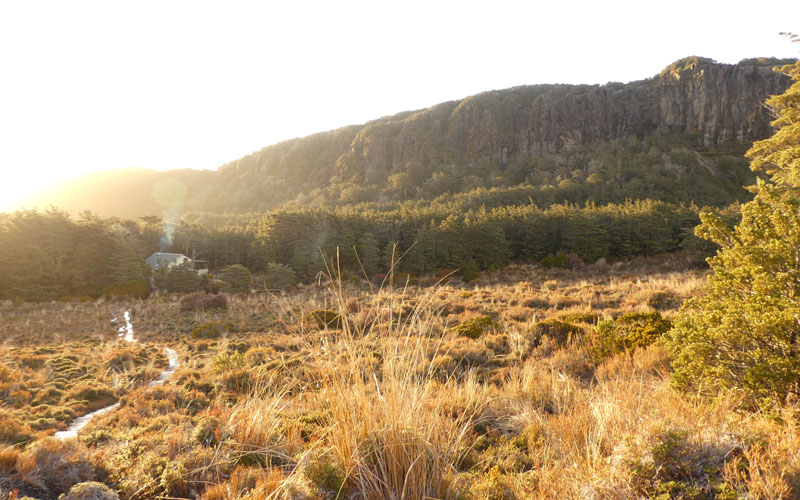 Mangaturuturu   Hut is a different design, and a the sun has now come out we take the opportunity to lay in the sun and sooth the mountain nerves. 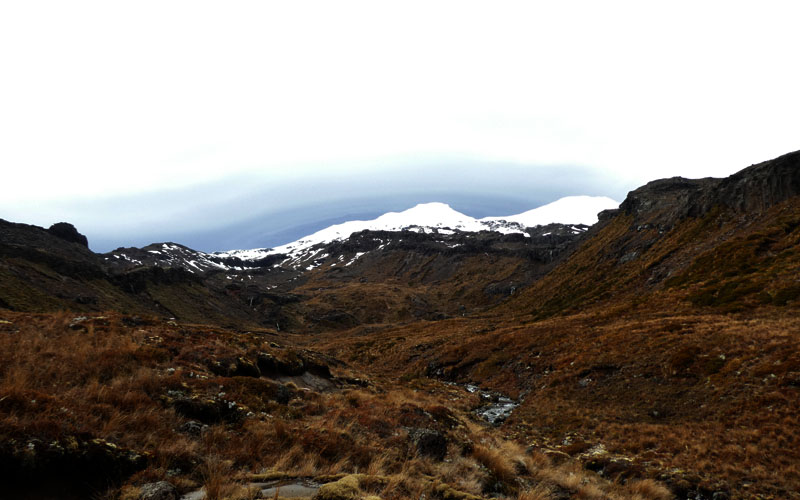 The forth days leg takes us back northward, around the west side. Judging by the sheer number of waterfalls alone its a lot wetter here. We cross what seems like endless valleys, and its a long day through to Whakapapiti. 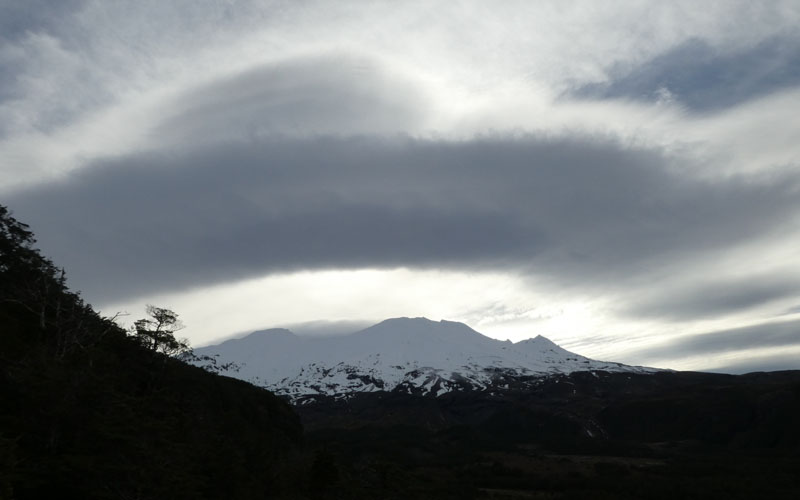 There were these drama filled clouds loitering over Ruapehu the whole day, which gave some interest to an otherwise stark landscape. 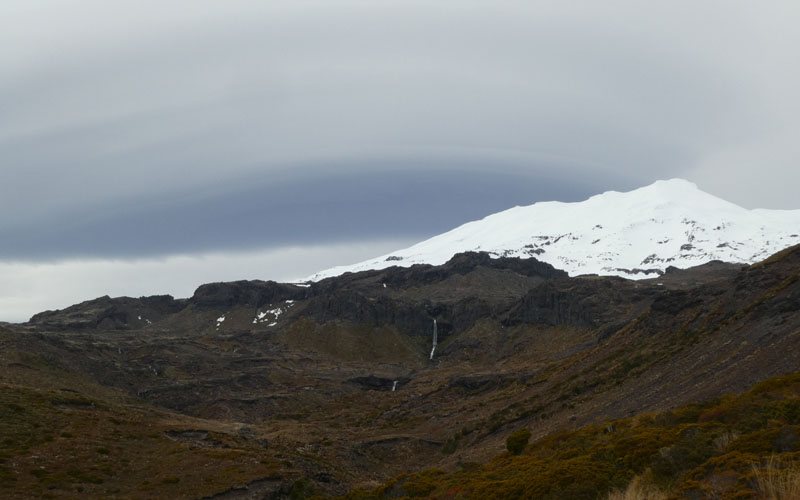 The odd brightness bands in the photos was actually how it looked, its not just the photo. 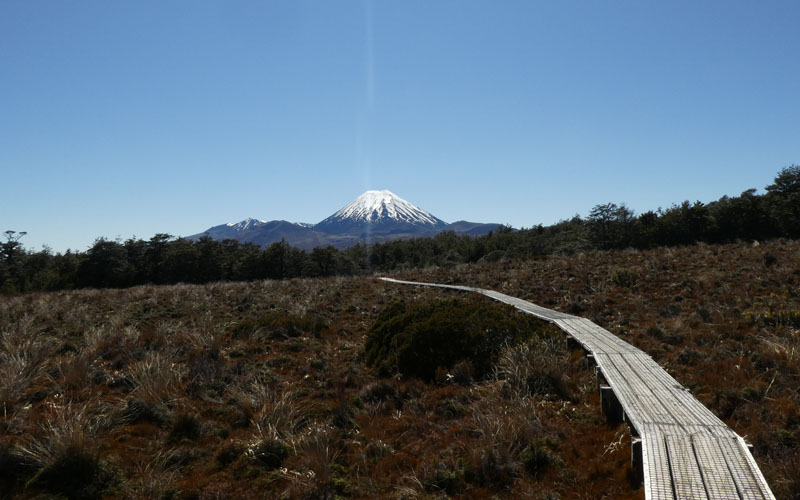 And the trip ended as it started with Ngauruhoe in the limelight. We didnt quite make it over the crossing which we had kept as an option for the final day if we had time. The trip felt like just quite enough for us. A soak in the Turangi hot pools is all thats left to do.

Spring tramp around Mt Ruapehu from the Desert Rd to Whakapapa Village.