Asking around, locals will tell you about (more than) the odd closed / unofficial track in Egmont National Park. One such track is the Kiri track, which connects Carrington Road to Pouakai Peak direct. Although the upper reaches appear as an unnamed hunters track on the current Topo50, the only map to show the entire track is the NZMS1 1969. 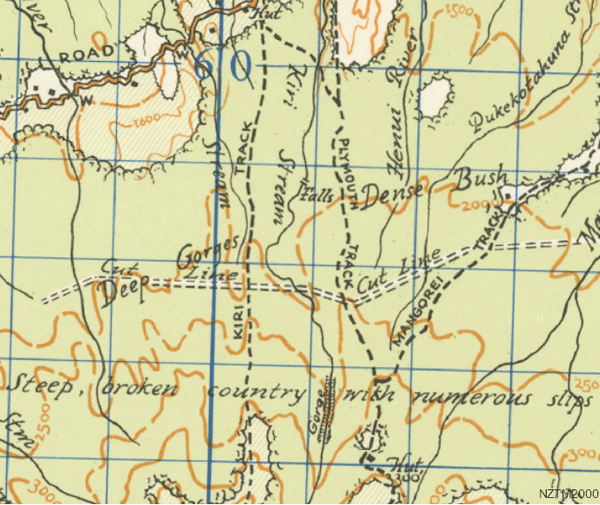 There is virtually nothing on the web about the track, except this where the New Plymouth Tramping Club acknowledges its existence. So on the weekend i went in search of it, and found a well maintained track in better state than many official tracks in the park. (Taranaki at one time had as many as 18 full time track workers, but now has exactly three.)

The track is actually a bit of a grunt climbing as it does 960m. The line follows the NZMS map pretty closely in fact not deviating more than 150m. Not bad for pre GPS technology The exit onto the tops is a bit meandery, but there are some great views of the Pouakai range and the mountain. 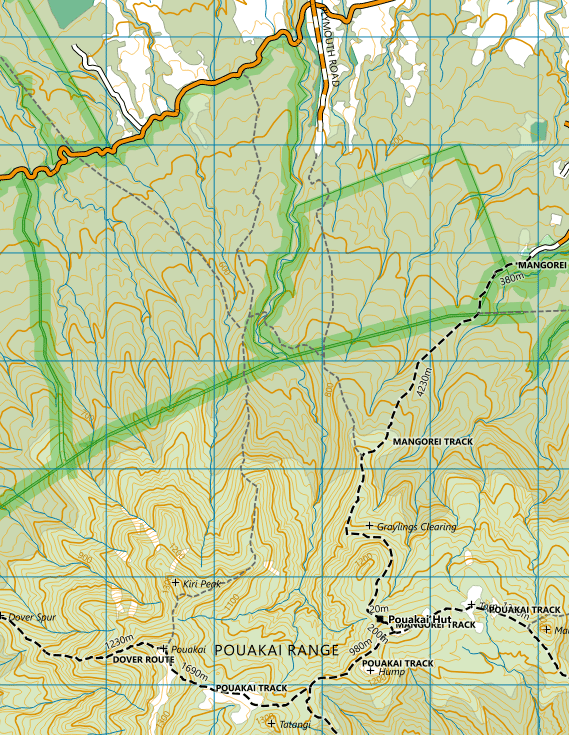 Actual GPS derived route, and note several other nearby tracks

As well as maintaining the Kiri Track, the NPTC also maintains a link track which connects across to the old Plymouth track, the latter of which is another "closed" track in good condition which at present appears on the Topo50 as a hunters track. By way of context, the many wide spaced dashed tracks (that appear typically closer to the ring plain), on the Topo50 are tracks used by the 3 full time Goat Hunters that have operated in the park for decades, and without which the feral goats would double in number every year.

Kiri track starts on Carrington Road, 1100m west of Plymouth Road. It will take a keen eye to spot the entrance, and has poor parking. My route was up Kiri to Pouakai Hut, and returning via Plymouth Track. The Plymouth Track notionally emerges out at Plymouth Road but has access issues (ie someone has built a house almost bang on the paper road). The Kiri track is marked with an eclectic mixture of permolat, cruise tape, and pink spray paint. The start and end of the link track have blue flags tied to trees. 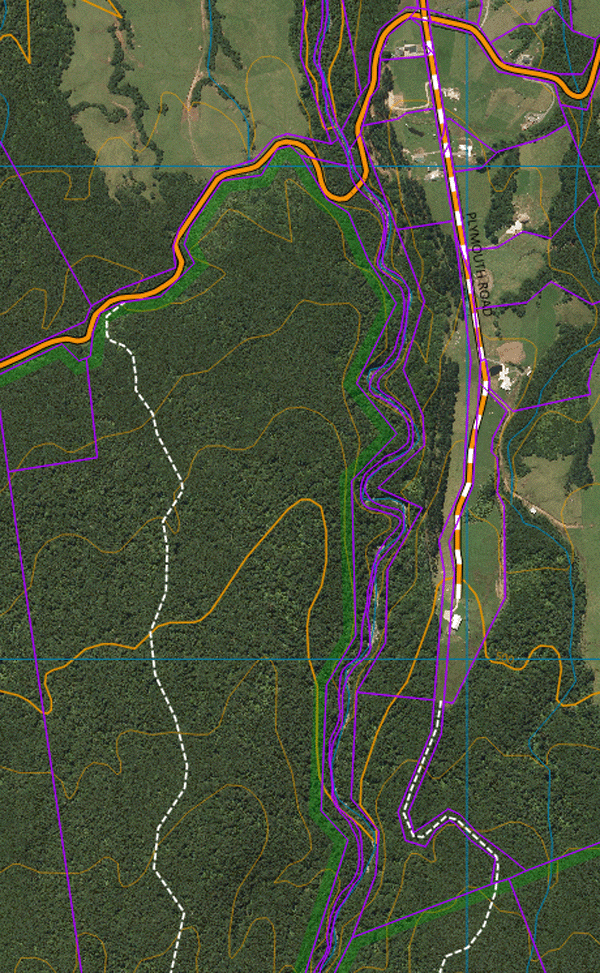 The observant will notice yet another track on the second map above, connecting Katake to Pouakai, and judging by the overgrown/hidden sign on Carrington Road has been christened the Goodwin Track. A little investigation again points to the NPTC eg here and here., and a rough GPS trace here.

The weather encountered on the weekend was that high pressure "fine" you often get around here, with a local cloud layer. The resulting mist makes you surprisingly wet. Here are some images. 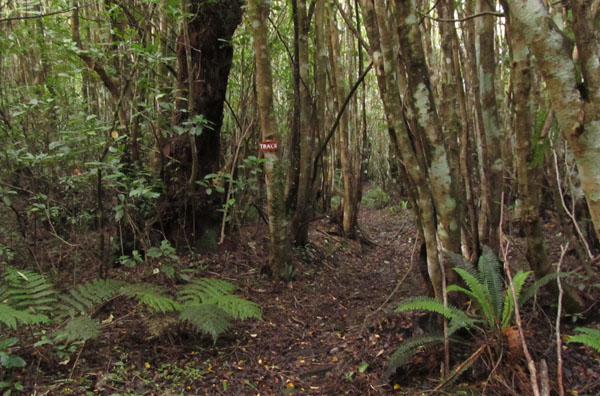 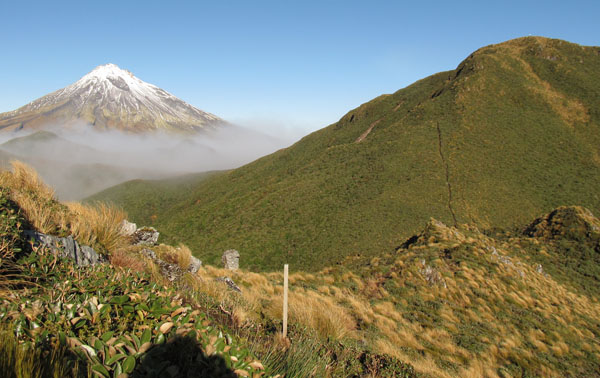 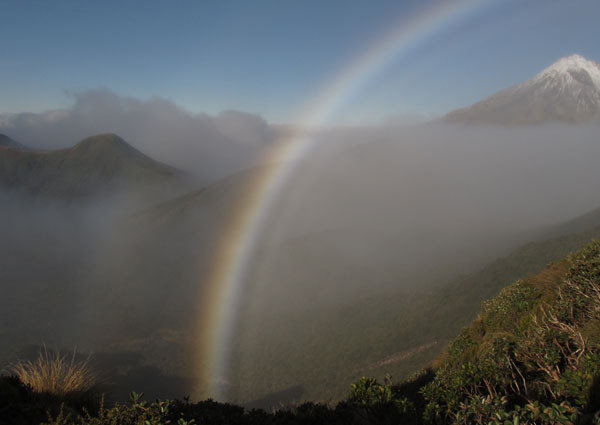 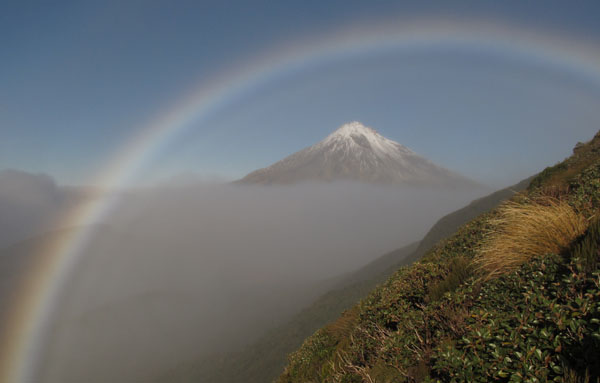 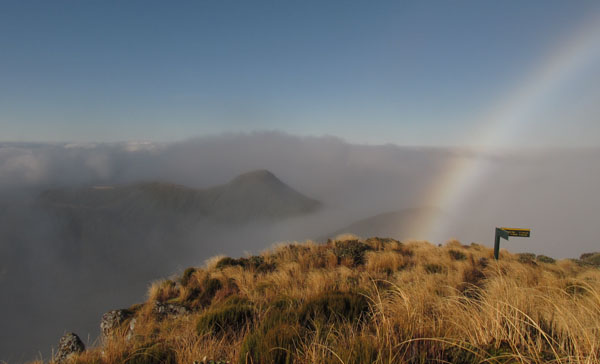 On the 1400m Pouakai Summit. The "Hump" at center, the hut to the left 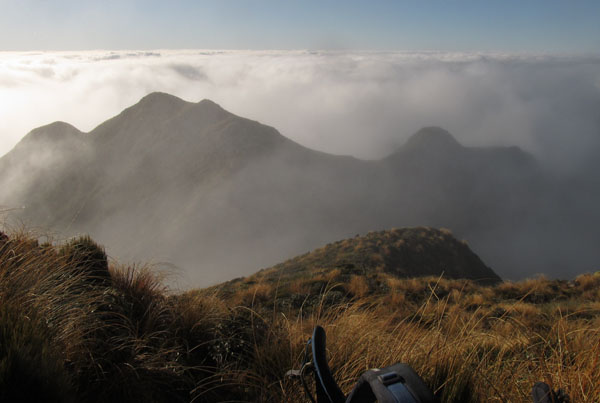 Looking back down the now engulfed Kiri Ridge 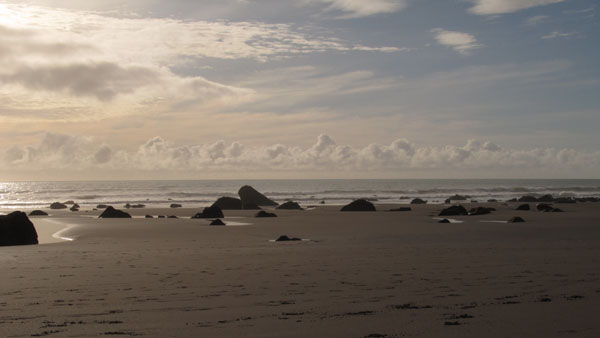 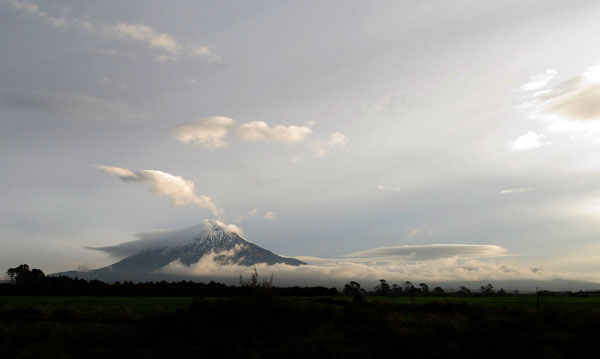 As usual, everyone else had a fine weekend

Exploring some of the closed tracks in Egmont National Park, Taranaki.