The last time i tried to hike up Mt Fyffe it was shrouded in the low cloud that seems to be a feature of Kaikoura. This time i hand picked a day with southerly air, about ten days out, and it materialized on schedule. 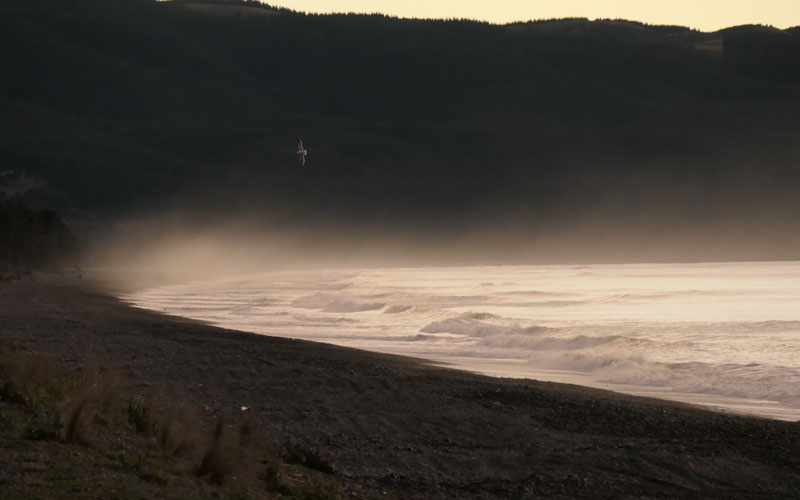 On the way a stop at Amberly. This is the dawn mist on the ocean. 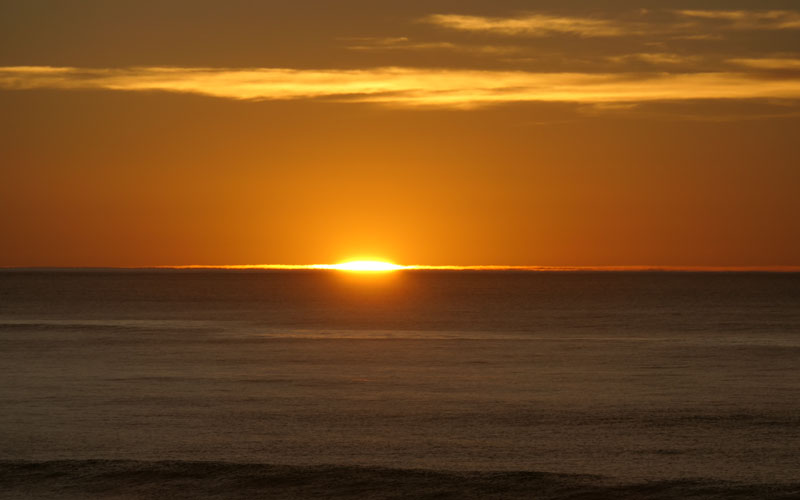 And the first rays of sunrise at the same beach. 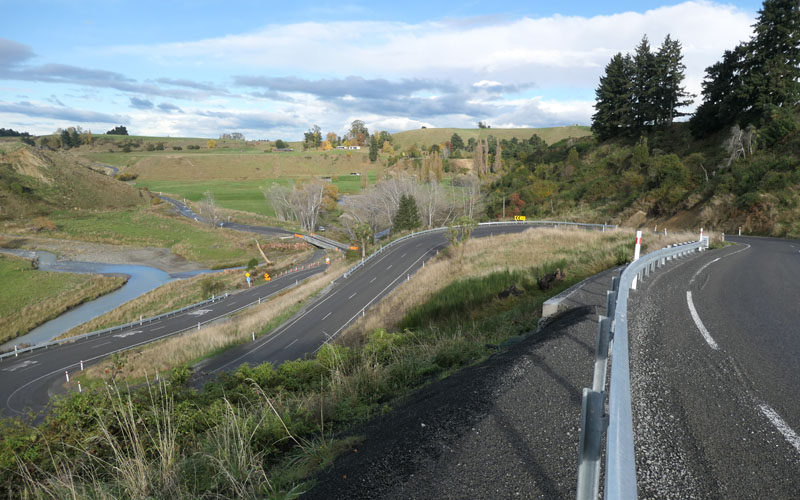 Having decided to take the inland route, making some stops at Culverdon, Rotherham, and Waiau. The town of Waiau in particular was at the epicenter of the 2016 Kaikoura earthquake. The lovely old stone church is on a serious serious lean. This shot is of an army bridge on the road north, built to replace the damaged bridge. 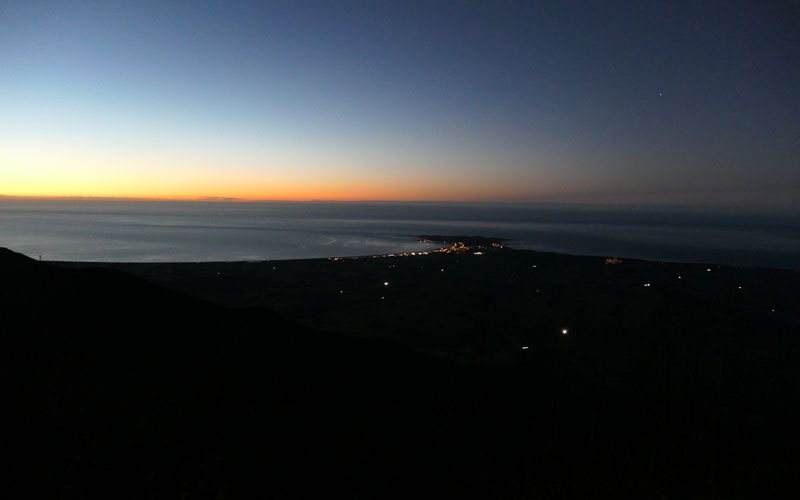 Its still raining on the forecast weather window day, so i was a bit slow out the door, and ended up climbing up to the hut in the cool evening light. I also had to walk 10 km from where i was staying, as i wanted to do the trip as a circuit. The lights of Kaikoura in the distance. 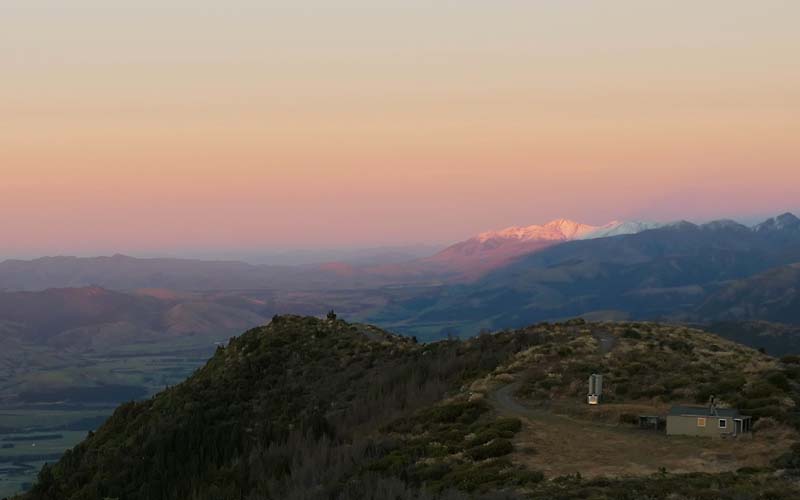 The hut is indistinct at bottom right. Kaikoura facing as it does southeast, and it being well into autumn, the sun rose behind a spur running off Fyffe. This particular day none of us felt much like bolting up the summit in the morning chill.

But nonetheless the day dawned spectacularly clear, just one day later than the long range forecast had predicted. 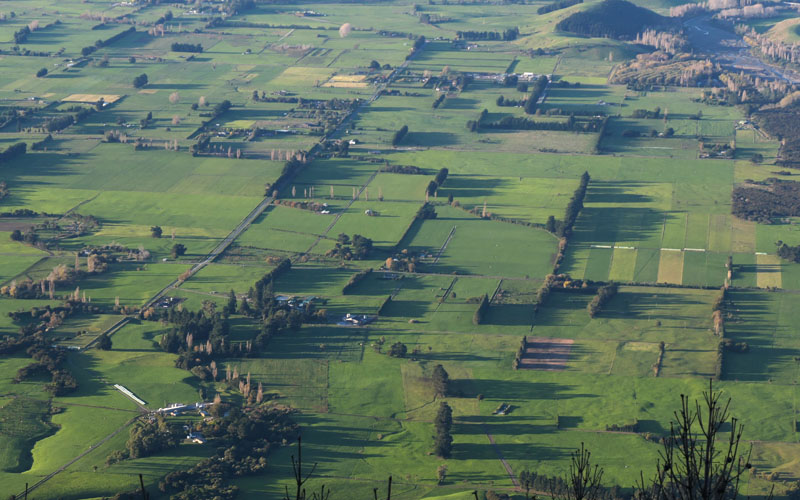 Watching the shadows change on the shelterbelts was fascinating. Mt Fyffe is not overly high at 1600m but stands proud of the plains, close to the sea. (Its a 1550m climb). 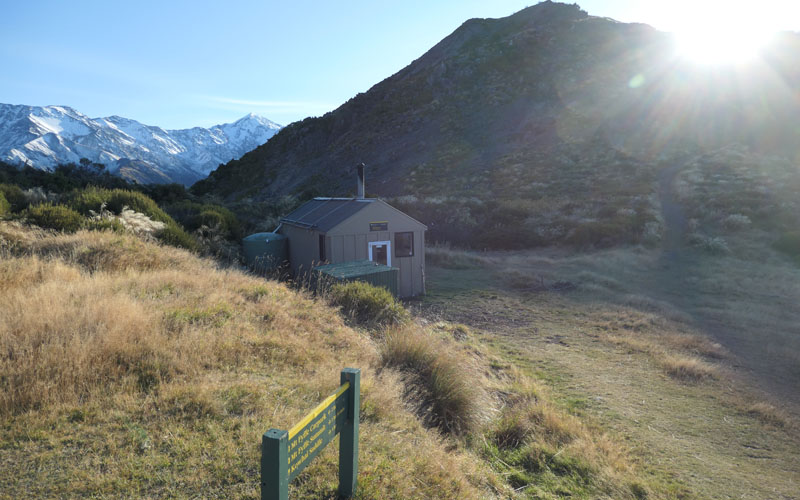 Another view of the hut, with the summit behind. 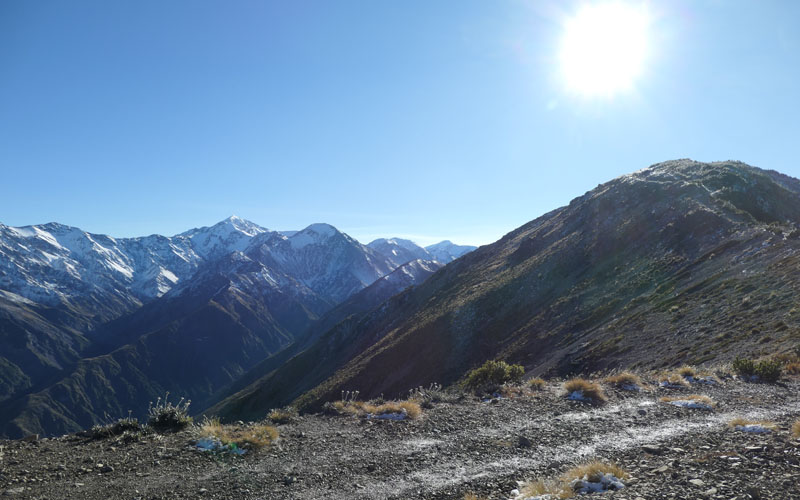 Behind that is the Seaward Kaikoura range, with its 2600m Mt Manukau. My Manukau while relatively easy to climb is a very long day, and few attempt it. And, the hut that was used as a basecamp, Barrett Hut got wiped out by a landslide and replaced by Lake Hapuku.   Its in the Hapuku north branch. So many things to see and do. 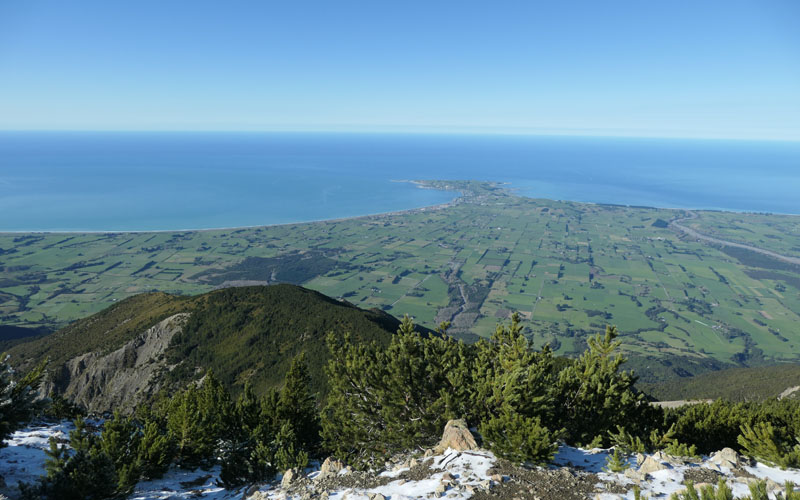 The bus is parked very near the center of the frame. At an Irish Pub in the middle of nowhere. Go figure. Right next to is a gravel stream that runs out of steam, and is one of many perfect perfect gravel quarrys utilized for the coast road rebuild. 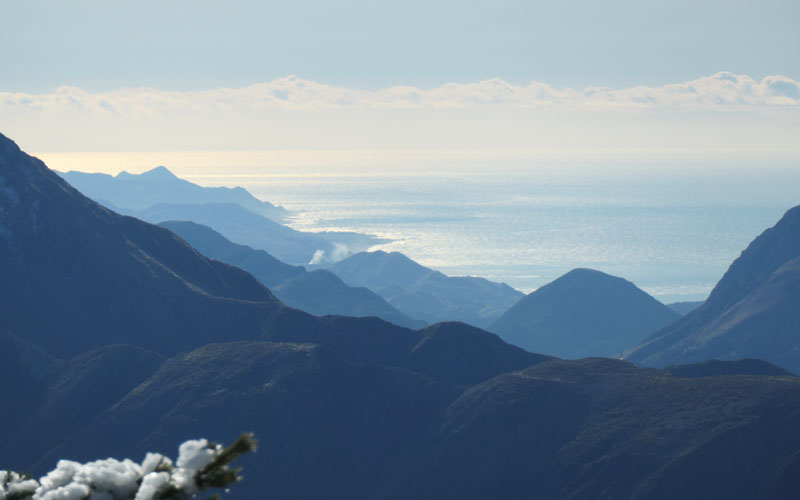 Looking north up the coast. 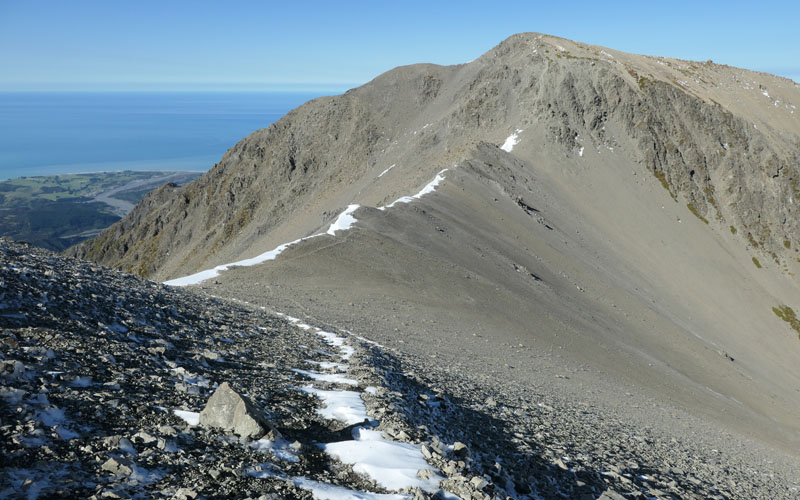 Heading north from the summit, across a feature known as the Gable, takes you down various screes into the Kowhai Saddle. 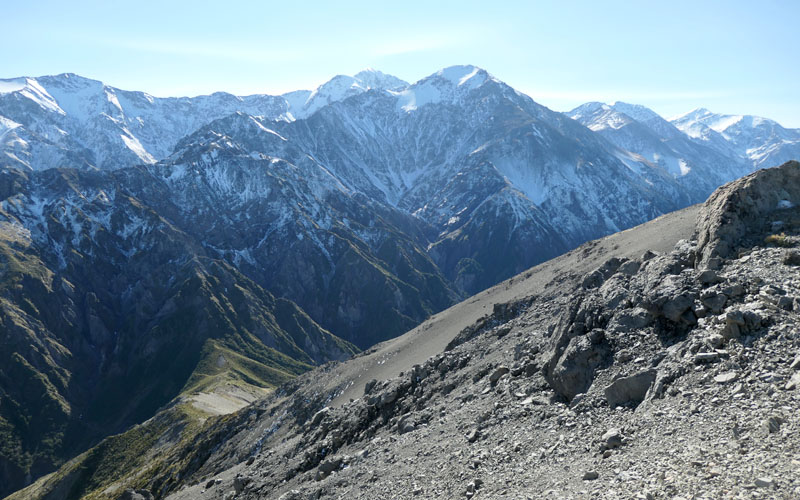 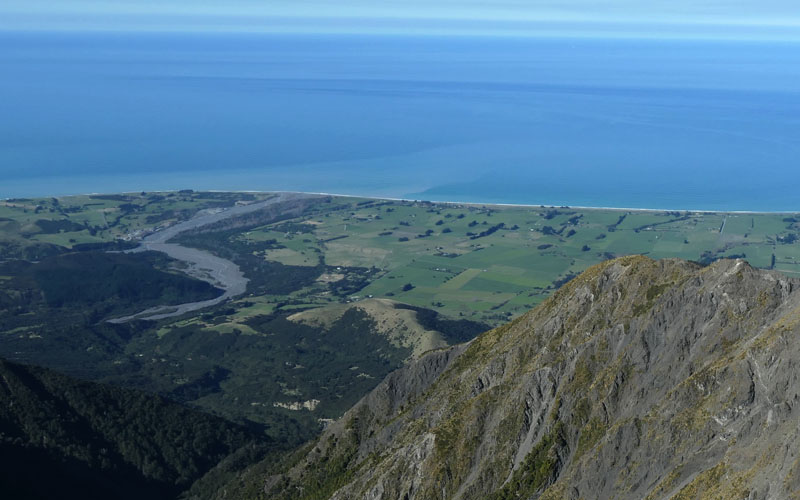 This is the Hapuku River outfall. Three years later the river is still flushing silt from the earthquake. 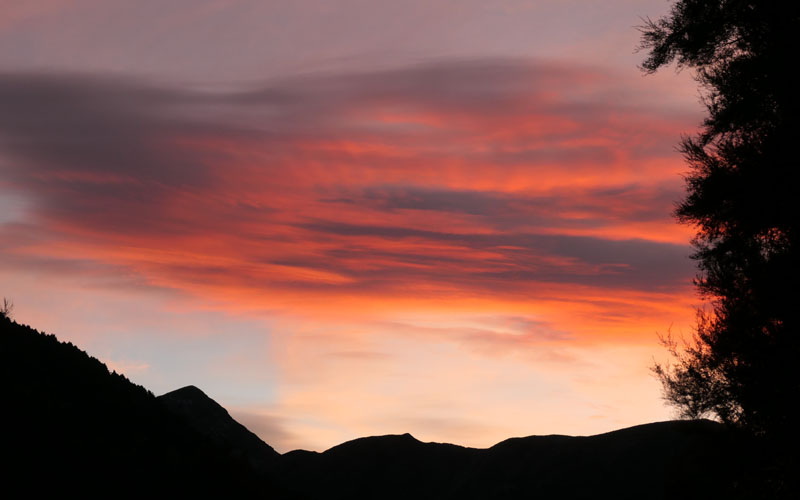 Its an easy day, following the damaged but manageable Hapuku Valley route, down to the Hapuku Hut. The earthquake left bountiful piles of firewood, and the hut was soon toasty. Sunset down valley. 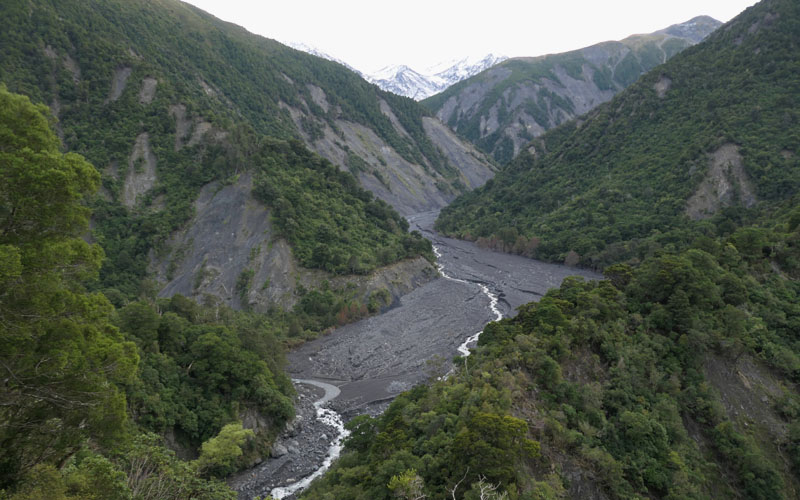 The route downstream is in an out of the bush, and this view is looking up the Hapuku north branch, toward the new lake. Everything about the valley feels raw and broken still. At one point i use the ice axe to cut steps across a slip face. 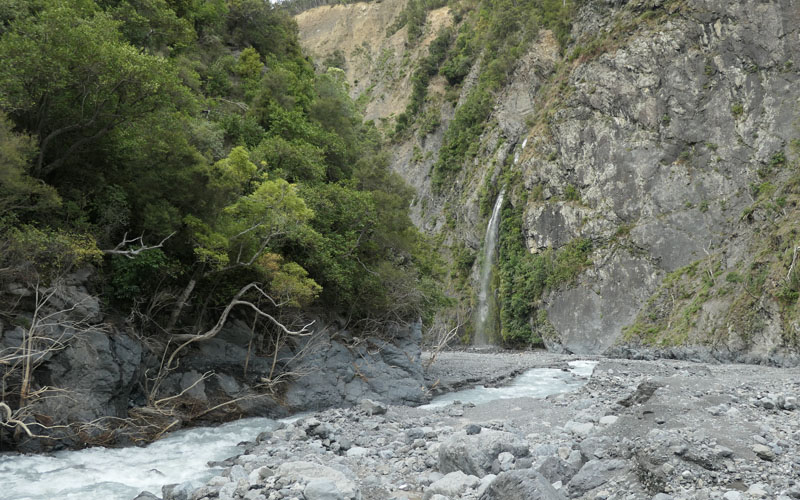 Finally out in the open river flats of the lower Hapuku. A rockhop and womble, then the final 10 K road walk back to the bus. 38 hilly kilometers later its time for that Guinness.

Mt Fyffe is the prominent hill behind the east coast town of Kaikoura. Climbing it on a fine day is up there with any trampers best days out.