After being inspired by a writeup on tramper.co.nz we headed off to Mesopotamia country for a fine spell during the Easter school break, lugging the lad along.

The country between Forest and Bush creeks was briefly owned by novelist/naturalist/explorer/jack-of-all-trades Samuel Butler between 1860 and 1864, who invested 4000 pounds to make a first European claim on the hill country to the west of the Rangitata. He named the station Mesopotamia from the Greek 'between rivers'. His original hut was in forest creek, and he later moved to the present Mesopotamia homestead site. Much later this same country was retired during tenure review and is now our tramping destination. The first photo shows an example of the erosion which probably lead to its retirement. 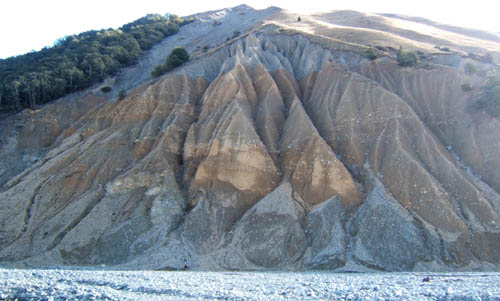 Starting at Forest creek late in the day we camped at the end of the 4wd track, 2hrs. The carpark and DOC info panel that was installed on the west side of the road is now gone, just one year later, i suspect the runholder and DOC had a falling out. Park on the east side of the road by the bridge. Negotiate the barbed wire fence next to the bridge to gain the river bed, and follow that all the way up. Notice obtrusive new   'Keep out' signs all the way up. Stay in the river which is an esplanade reserve and youll be fine. 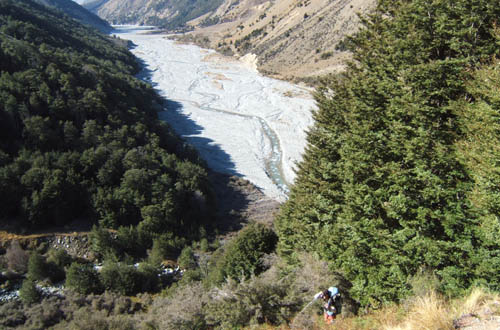 Passing Butlers 1860 winter cabin site (where he wrote and decided to sheep farm in the area), and climbing out of Forest Creek, we begin what is to be an 1100m vertical ascent to Bullock Bow Saddle. 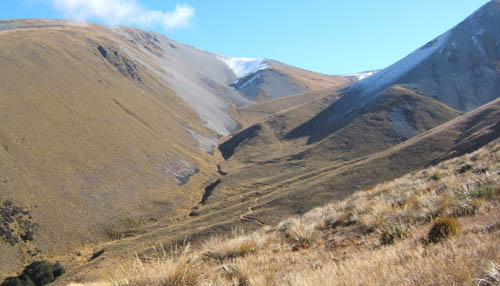 Thusly, on a good 4wd track, after passing the private Felt Hut. Its pretty steep in places. 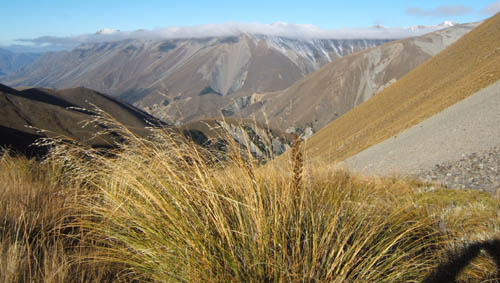 Note the erosion on Ben Mcleod Range. This ironically hasnt been retired. 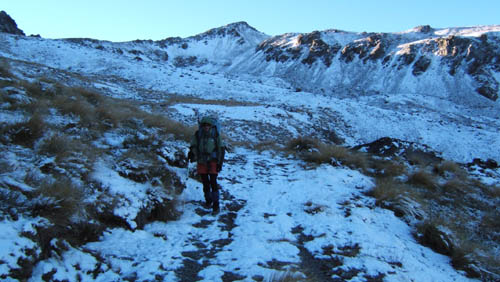 Nearing the saddle at 1700m its shady and a cool breeze. Brabyn recommends climbing the hill to the south, but we are running behind. 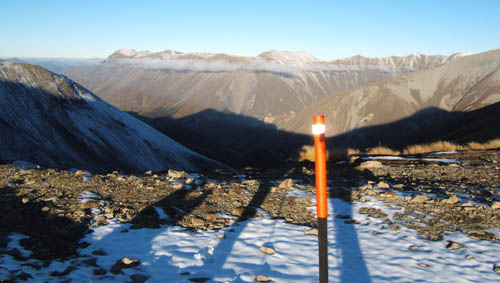 DOC's orange markers visible enough in the bush but out here tend to blend into the endless warm shades of the sheep country. But note the reflector tape which was to come in handy as the day light faded and torches on at 1800hrs sharp to walk the final hour to Stone hut after an 11hr day, much longer than anticipated. 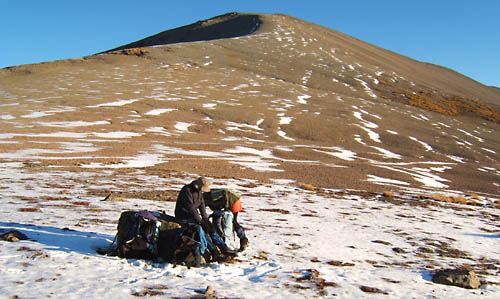 The saddle enjoys views in both directions and even has a place to tie your horse. Beginning the descent down a horse/quad bike trail of sorts that gets progressively less well worn the further you go. 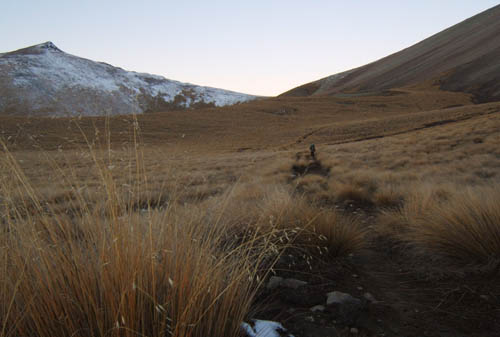 The lights fading fast, but its a gentle wombly kind of descent into the valley head at 1300m, where it forks with Two Thumbs track/ Te Araroa. 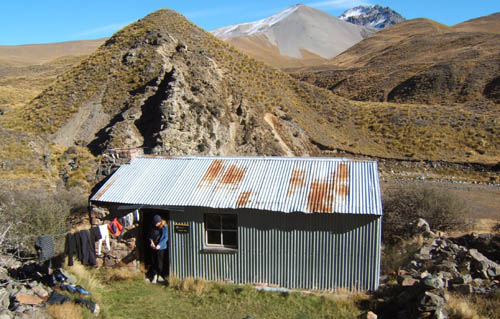 After tussock crashing down towards stone hut, the poles in bush stream are still pretty sparse, and you can barely see the next one ahead at times. However the reflectors were good, and we arrived around 1930hrs to a really cold hut, with frost forming on our packs, frozen bladders etc, to a quick tea and bed. The morning reveals a truly beautiful valley. We pack up and get going, but at the sagging stock bridge near by see a baby Tahr, which seems to have no fear of us, and has probably lost its mum to hunters. We later see a large mob on the hill opposite. They seem to be relishing the sheep's departure. 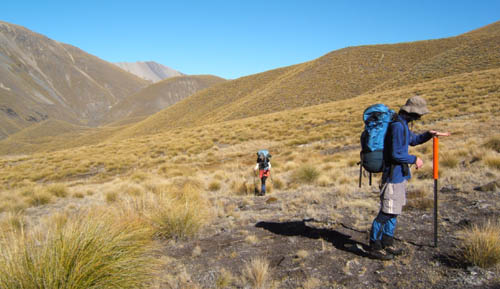 Travel in the middle Bush Stream is fairly traversey, crosses two non trivial saddles to avoid unknown river obstructions. There's no ground trail except the ubiquitous criss-crossing sheep trails. Mostly its tussolk hopping, but theres more open sections of mosses and bare ground, that around here constitutes fairly abused high country soils. We wonder aloud how the country will respond to retirement, and ponder whether retaining the Merino's at lower stocking rates might have been as good a solution. I shudder as i recall Lady Barker's diary's where she fondly recalls torching 12 foot tall tossock and matagouri in the 1800s. 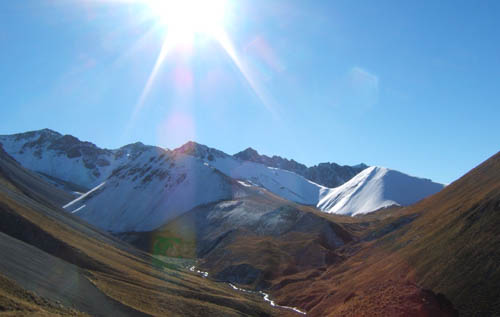 Pack horse creek, and the higher of the two saddles (1540m) at right. 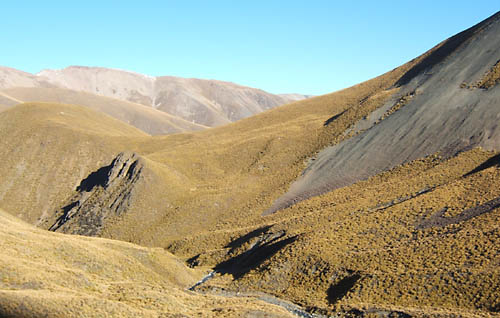 Looking back to the first saddle (1350m). Traversing is not as difficult as it looks because of the sheep contouring. 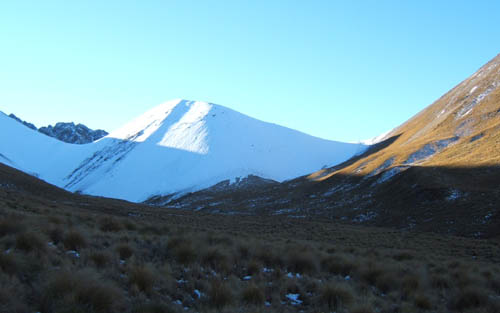 The final climb up to the 1540m saddle is in melting snow from falls last week. 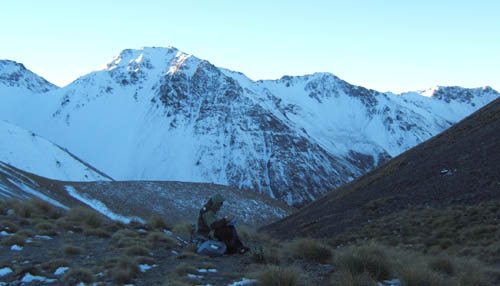 Vistas are ever changing and there is never a dull moment to bore one on what for us is to be a 6.5 hour leg. After yesterdays long day we are really tired by now. This is looking back into the Bush headwaters, Butlers 'in between' country. Not a tree in sight anywhere and our night at Stone hut was indeed a chilly one. 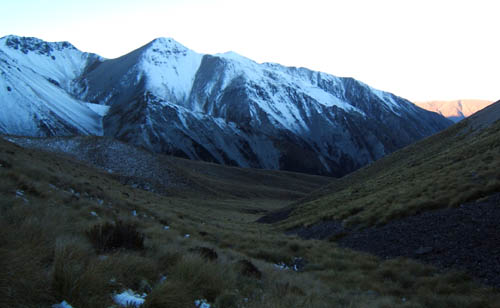 Finally the long rightward curving valley descent to Crooked Spur is easy and, the hut is a welcome relief. Even more welcome is that its a fabulous spot for a hut and better still the old sacking bunks we were expecting have been replaced with DOC bunks and mattresses. While the hut is loftily sited, theres still both a creek and a small forest for firewood, those two quintessential criteria of all old time hut builders. The hut is already warmed by two other occupants. Note that the hut now sleeps 8, and is surprisingly comfortable considering its just a bunch of mountain beech saplings and some tar paper on a crumbling concrete slab. 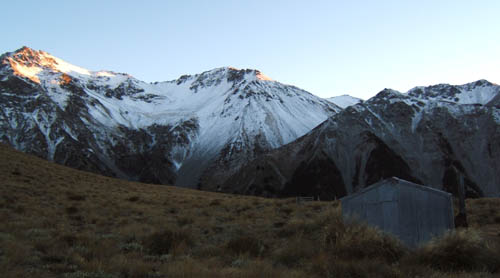 The Brabazon range to the north looks worth exploring. Near the hut you can make out the horse pen, which is another standard feature of all the hits here. 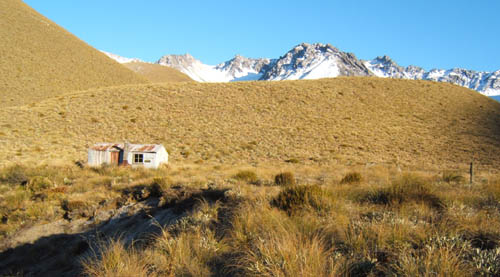 You get this vague sense that the place has tonnes of history but its mostly an inkling really, like all history it seeps away leaving precious little in its wake. And this is coming from one who has read all of the old mustering books in the local library. It would be good to see some interpretive displays for the huts. 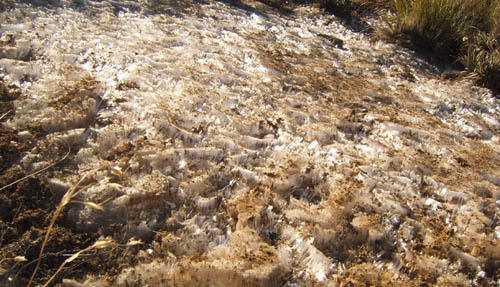 The ever present frost, that followed us everywhere this late autumn trip including the invisible slippy rock covering in the rivers. 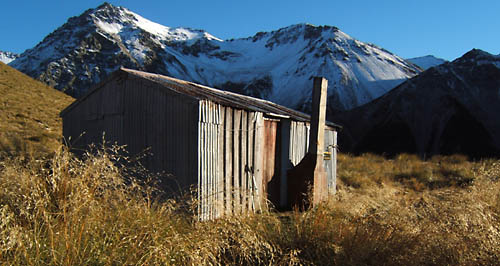 Crooked Spur has a kind of beauty all of its own. 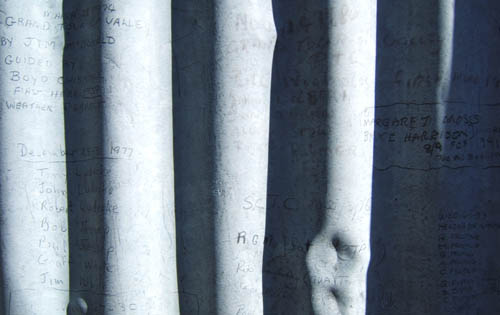 This is all the interpretive panel you need really. Mustering partys back to 1940 and beyond left their sigs on the tin outside in graphite pencil lead which appears remarkably durable. Day 4 sees the 400m drop to the river and the river bash out to the station. But first the poled route drags you over a bluff or two. Not really sure why, although the river is up so we didnt push our luck to find out. As you can see permanent shade this time of the year. 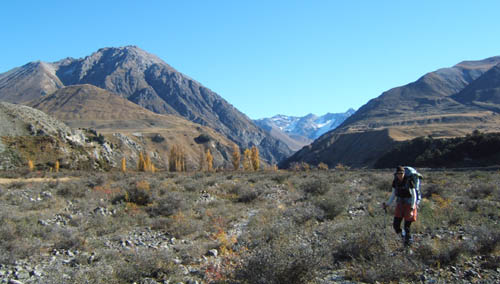 Leg 4 is the only section we complete in under the recommended time at 3 and a bit hours. Theres more 'tenure review nicetys' to negotiate back to the car (which we had previously relocated by bike as suggested). 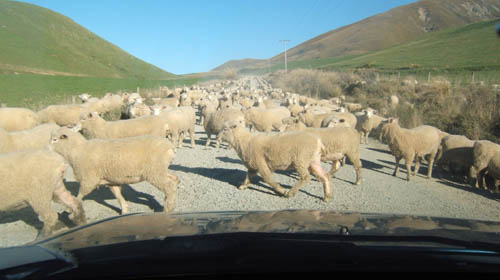 Theres at least   5000 sheep in the mob we encounter on route home.