Prior to 1993 / 2004   there was a splendid high level round the mountain route connecting Holly and Kahui Huts. But unfortunately ongoing erosion in the area eventually closed the track, after it had been rerouted several times. Now there is only the longer route down the Stony.

Basically the northern slopes comprise young gravel depositions and when combined with frequent 50mm/hour and 200mm/day rain storms lead to quite radical gravel displacement events. Its quite an awe inspiring area to see.

So with Queens birthday bringing great weather, a trip over this old route was devised. Having previously traced what remains of the track from the 2011 aerial photography, I loaded this up as a route on the Etrex20. That way getting lost would only ever be a short term affair. 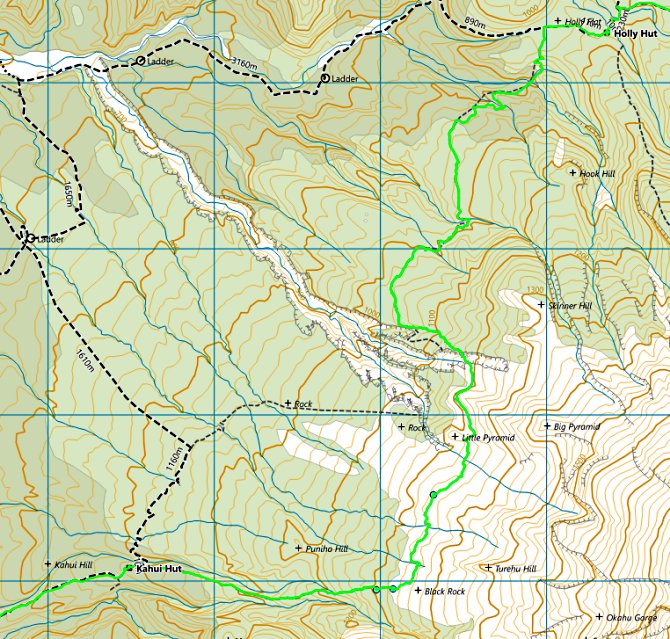 The grey line was the tracing, and the green line my actual route/gps track.

The two day trip comprised Skifield to Holly Hut, Holly to Ihaia Road end. There are still an amazing amount of tourists in the park with 30 plus in Holly that night. In case you havent seen the erosion in Manganui Gorge Ive included a picture. Where the old track crossing to the skifield was is now an 8m vertical drop. 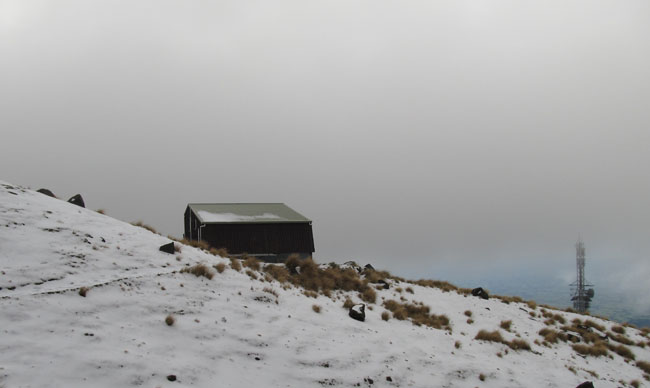 Wandering around to Tahurangi, the snow is late coming this year.

Between 5am and 7am, about a dozen different smart phone alarms go off... its Monday morning. The Doc hunter camped out at Holly tells me that the first section from the Bells Falls Track down to Peters Stream is still passable. That's a start. 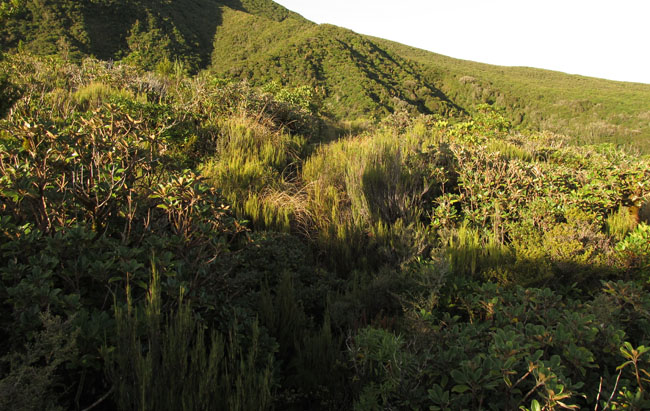 Generally the first part is good. You pick up the track after crossing Peters Stream by looking directly across the river to a cairn, and the track is on the right a little.The track is well graded and follows the contour around climbing gently. As you emerge onto the broad slopes below Skinner Hill, the shrubbery gets thicker. The key there is making sure to stay on the track and knowing just where to part the bushes. After about 3 hours of this you arrive near the point where the trail disappears into the chasm. I cut my losses near that point and tried to follow a dry creek bed up, but abandoned that for the ridge which was easier going. In hindsight staying with the original track until the last minute would be best. 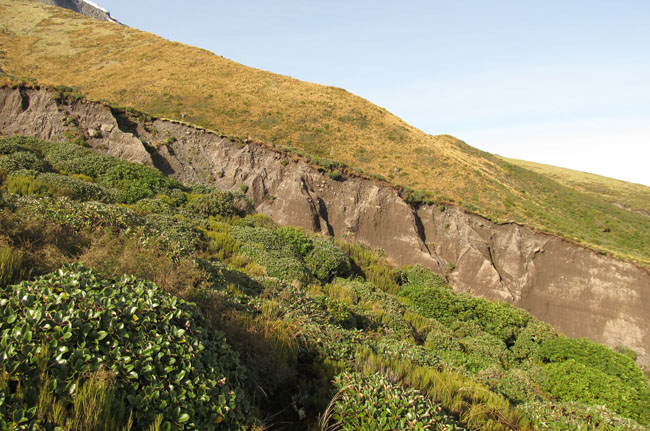 Nearly upon the chasm

By ascending 40 vertical meters from the end of the old track there is currently a viable crossing point, at 1165m that avoids a further ascent to 1280m. Above 1100m the scrub starts to thin and you can find easier passage. 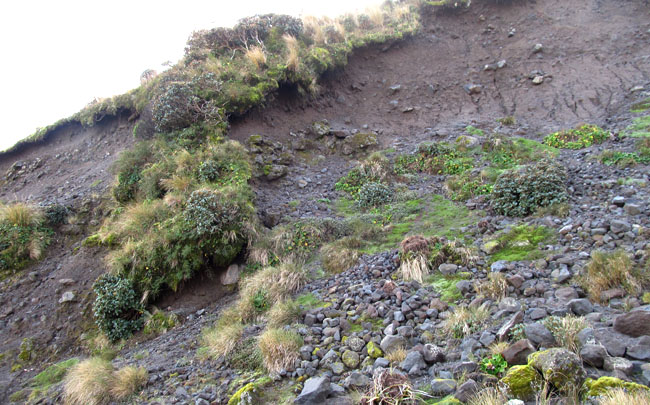 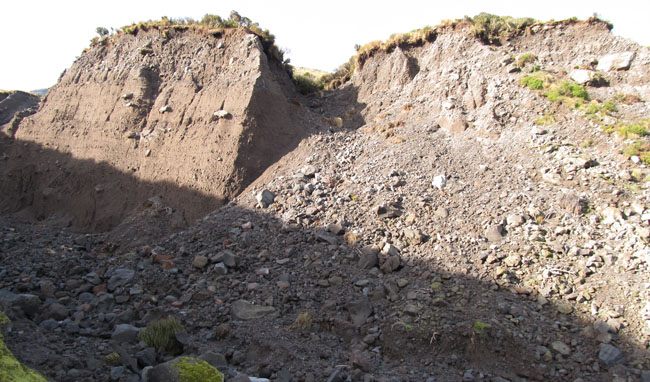 Looking down the Pyramid Chasm at the crossing point.

Once across the travel is easy and quickly you exit onto the mosses and tussolk that predominate on the western slopes. You then traverse the   slopes below big pyramid,heading for the slight saddle uphill of little Pyramid. 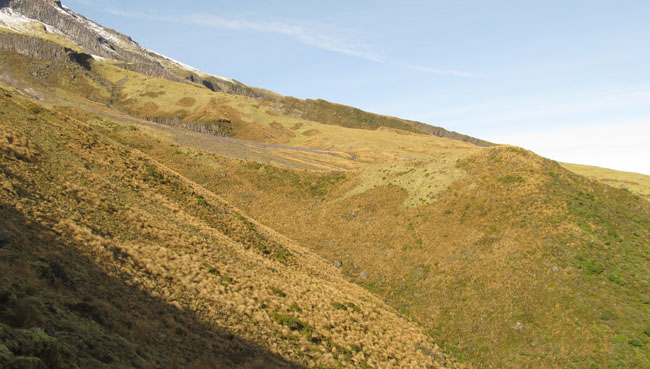 I was running a tad behind, and lets say the bush bashing used up my pioneering spirit for the day, and it was thus decided to not follow the rest of the track back to Kahui, but to take the direct route across the tops to black rock. This was straight forward, traversing at the 1250m contour. I had previously walked the rest of the track about 5 years ago and recall that one of either Turehu or Maero Streams had eroded a fair bit and required some deft scrambling. The hunter thought it might not be passable now at all. Taking the high traverse you do still have to pick your crossing points for the headwaters of the two streams mentioned above. Taken from little pyramid, you can just make out the old track heading to Kahui. Taken from the same spot looking down Pyramid Stream, and the devastation that occurred there. This was just a minor unnamed tributary, looking like a bulldozer had been there 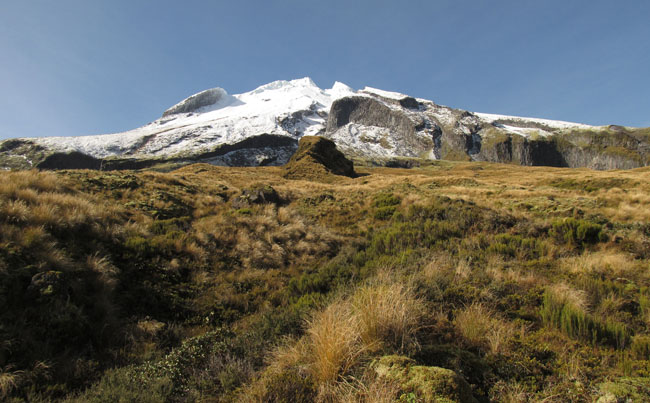 On the slopes below Turehu Hill Not much time to stop and daydream, the days are short 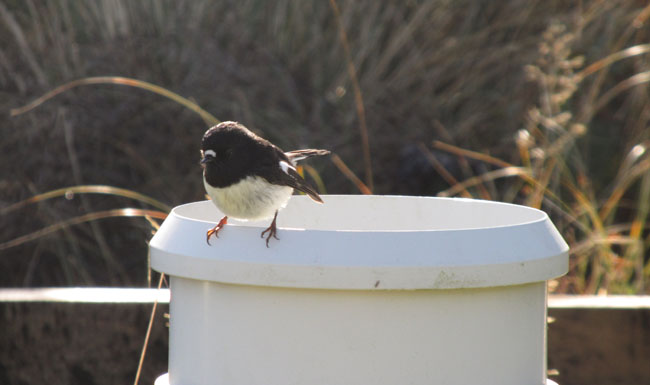 Lots of birds about this year. Not for much longer, its 1080 year. Orthophoto and gps track of the key landmarks

It was a fun day out, if you can make out the 'track' in the images above, and you know where the track ought to be, then youre good to give it a go.