For lowish power linux web dev / media / storage etc servers you cant really go past mini-itx atom boards. However, 10-20W is about where they operate. But datalogging applications, such as power monitoring 24/7, require much lower power consumption. While Intel's next generation atom (due sept 13) has expectations of being something of an ARM killer, in the mean time, ARM is where its at.

The obvious candidate, rPi, has an incredible 700,000 board user base, so must be doing something right. But when i asked around, two of the more featureful A10 boards for their cost stood out, both have dedicated (not via usb) 100M Ethernet, 1G ram, 4G on board flash, and 3G sata. Those specs are attractive. The Cubieboard seems well spec'ed for our purpose, has headers for hacking. The Mele has no headers, but has wifi and a nice wee case. Neither have particularly strong user communitys. There are bucket loads of others, but for lots of reasons, my money is still on silvermont.

But for our present purpose, based on reported power consumption of 1-2W, I decide to start with cubieboard. The below is mostly notes to self about installing debian on the cubieboard. The one we ordered from miniand, arrived inside 2 weeks using the $10 international shipping option, NZD 75 all up. 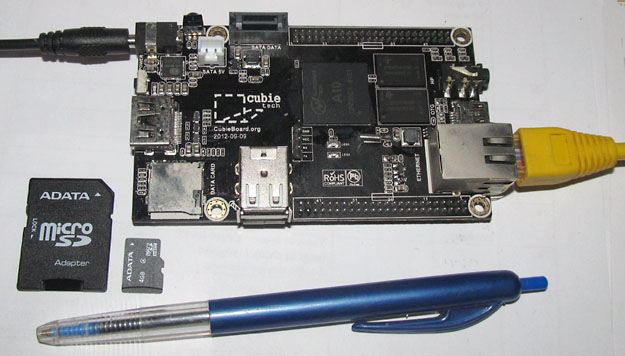 While Debian maintains a few arm ports the field is moving to armhf. Debian currently only officially supports a small number of older embedded devices such as sheevaplug. However a lots of community supported builds are available. For the purposes of this intial test setup, i decide to use cubian. The cubian image is a basic "standard system" image, although the mali graphics driver is still enabled. In order to free up the mali ram we will probaly need either a new kernal or romans headless image .

For now im just going to run the thing off a few different throwaway uSD cards, until i decide which img is best. Or until debian catchup with the state of play in the embedded world. Or silvermont. Or whether a credit card sized computer can actually do real work. Which ever comes first

OS Download: www.cubian.org/downloads (i used r3, but r8 is now out)

Youll also need 7zip,winscp, putty, and a RJ45 patch cord, know what to do with them.

A 4GB or better uSD. Class 10 is recomended.

The image is 4GB, highly compressed to 90MB with 7zip.

2. Write the cubian image to it using win32diskimager or similar

6. Go to your LAN router interface, look under LAN, ARP table/client ips or similar to get the IP address of the cubie

7. Use putty to connect to that ip, port 36000, username cubie, password cubie

After about a minute or two the blue led should go out. If it continues to flash according to the manual this means that the board failed to estabish a ethernet link. Evidently the odd board has had a hardware issue with the LAN crystal.

First the basics, enable the root user, and add another user with ssh cert.

root@Cubian:# adduser myname #on debian adduser is an improved version of useradd

{nows a good time to install your /home/myname/.ssh/authorized_keys} using winscp

Hardware wise, on board flash is not mounted, mmc flash in two partitions 2/3s of which is mounted as /, the rest is swap. Theres 1GB or ram, a quarter of which is reserved for the graphics. So room for improvement here and there. Heres a summary:

Todo: Sort partitions on the sd card if the card is bigger than 4gb.

Todo: Use fdisk to fill the remaining space and mount as /home.

Todo: install to nand, mount the os readonly, ramdisk for /tmp, and /var/log

The device has no RTC battery, and out of the box ntp isnt installed. It sets the time using ntpdate at boot.

Do it carefully else youll lose ethernet when you reboot. Given thats possibly all you have thats going to suck.

It takes a tad less than a minute to reboot. Once we have our shell back we are good to go.

So now its time to install a lamp stack and whatnot so we can get on with the business of power monitoring.

#change the primary   entry to (for NZ)

Install a lamp stack. Well give lighty a go, its pretty easy:

"Note it's important to install php-cgi in the order listed above. If you try to install php5 without first installing the php5-cgi package then it will install Apache as well, which we don't want for this light-weight lighttpd server." -- www.penguintutor.com/linux/light-webserver

grant ALL privileges on blackbox.* to cubie@localhost identified by 'secret';

Couple of missing utils, and remove some of the junkware that seems to come with recent releases of cubian:

When thats all done, open up a browser on a computer in your LAN, if everythings gone OK youll get a phpinfo page at http://192.168.0.3/. All joy and happiness.

SD cards are very unforgiving of sudden powerdowns. Make 100% certain you have a reliable power supply for the board. And be very careful to always power the board down gracefully...

If you do not, you will find that your sd card dies very quickly (weeks). Many dev board users have struggled with SD cards. However the one here has been well powered and has survived 18 months of   24/7 uptime.

I expect to write more about this in a future article.

While rationally i knew it would be low, i wasnt ready for the reality of 1.25 watts. At 25 volts 50mA barely registers on the 10amp scale. I'll re-measure it on the 5V side, or with a higher resolution amp scale, after ive disabled the mali graphics system. That figure as well as including mali, also includes the power losses from the dc-dc converter. 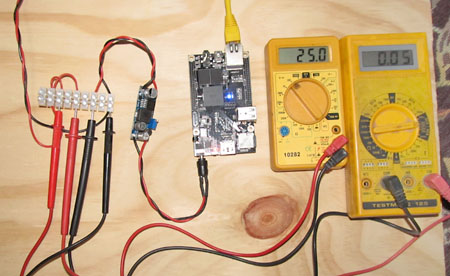 What do i think? It was quick and easy to get going in about an hour or two.

Sure debian doenst officially support these devices, so you cant just install it as you would normally, but once it is installed, the complete debian system is available as usual, and theres a few good wheezy images already built for the cubie.

I wouldnt describe the thing as greased lightning, theres 1/10 second pauses working at the console over ssh. There's a dual core version, if speed is an issue. But the cubie1 renders webpages not much slower than atom does.

If it proves to be reliable, itll do the job just fine.