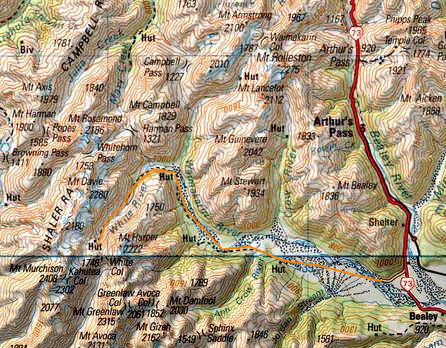 After a few days R&R at Murchison and Chch, I packed a bunch of food into the car and headed up to Arthur`s Pass. I asked the ranger for some longer moderate difficulty tramps and the Upper Waimak Valley was suggested for a start. I took one look at the weather map and had my doubts, but, he said you`ll be right. Yeah right. 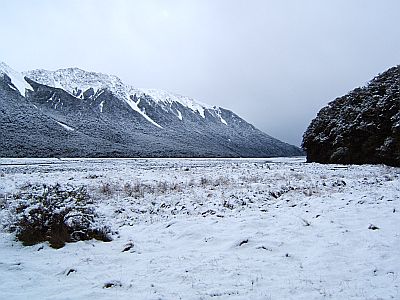 Id barely left the car park when drizzle turned to snow at 600m. The Waimak is a braided river and is usually low in winter because the water is all tied up in the form of snow. This makes river crossings easy. 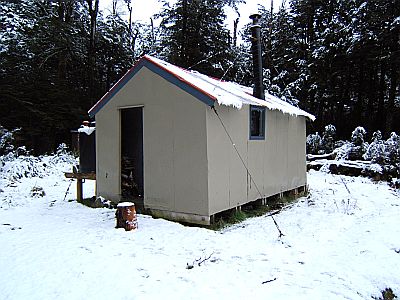 After a couple of hours I got as far as the Anticrow Hut, and called it an evening. (The name Anticrow (river and hut) comes from the fact that exactly opposite is the Crow River. It`s a good example of a renovated forest service 6 bunker. And fortunately the previous visitors have left dry wood. 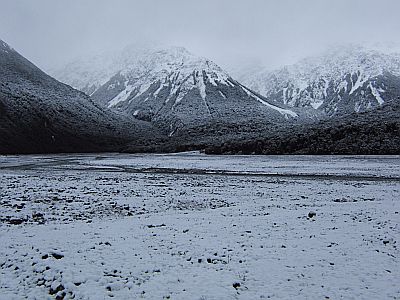 Next morning, the snows stopped for now and I walk up valley on open gravel flats. This view shows the major forks. To the left is te White River, my initial destination, and to the right is the route to Harmin Pass and Waimak Col, erm, planned later destinations. That as we shall see was not to be. 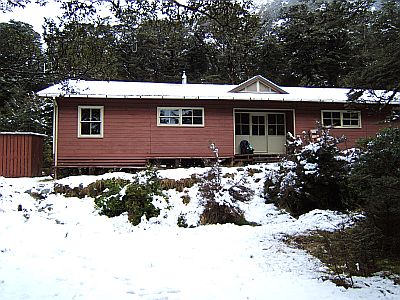 At the forks is the massive 30 something bunk Carrington Hut. I lunch there and move on in several inches of snow. 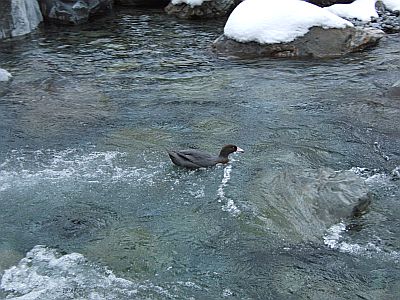 I see a pair of Blue ducks in the lower reaches of the White river. 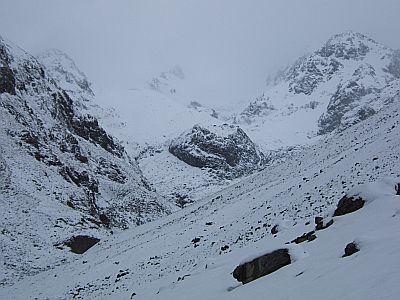 This is looking up the White valley. Its to be a later source of pain that you can actually see the Barker hut, which is where I am headed for some 5 hours before you reach it. It`s the dark spec atop the bluff at centre. The map shows a nice track up the white, but it was destroyed by one or more earthquakes. Its now not even a route, and I pick my way alternating in the river and sidling up the left slope. It`s a slippery and time consuming process, and in good conditions takes only 4 hours. It was to take me 6, and has been known to take others 10. The basic problem was that the new snow is so soft that it hides all manner or rocky bumps and hollows underneath. Bleeding shins and some many curses later we wallow up the final knee deep slope (around the left of the bluff) to the hut. 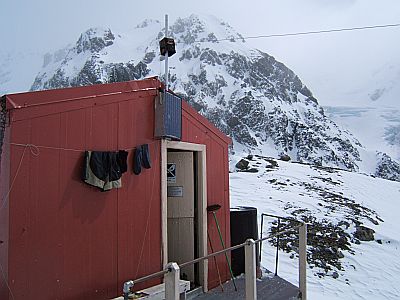 That there is Barker Hut, and its no DOC hut, they`d never build in such an exposed site. The Canterbury Mountaineering Club built it as a base to climb Mt Murchison and Mt Harper and other high peaks nearby. The huts at 1660m and consists of coolstore type polystyrene sandwich panels. There`s no heating--after all mountaineers are hardy types. There is however a solar powered HF radio, and light. The observant will notice, what I didn`t initially, and that is that one half of the antenna is actually missing. Later I mended it. It had swung in the wind too much and broke off. The water tank at right had a film, if that`s the right word, of about 4 inches of ice on top, which you had to rehack through each day. Inside the temperature hovered between +1 and -1 degrees. The hut is built, like most alpine huts on a bluff to protect it from avalanches. This means great views, when you can see anything at all. 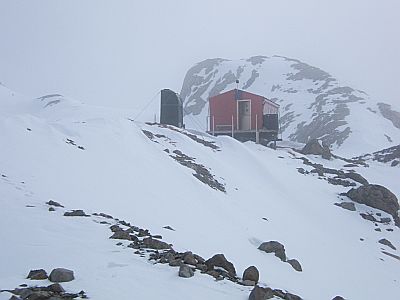 This is about as far as I got from the hut, keen as I was definitely not to go wading anywhere in thigh deep powder snow. My carefully thought out plan, based on predicted weather windows was to have a day climbing, based at the hut. However there was to be no climbing, nor exploring this time. In this view we can still see some rocks. Over the course of my three day stay there was about 25cm of snow each day and eventually it just turned all white. I had no real idea how long I was going to be stuck there, it just kept snowing and snowing, and by Sunday massive loose powder avalanches began to fall like waterfalls all around me. When I left the DOC visitors center the avalanche warning level was low. It certainly wasn`t to remain low. Through daily checkins with the folks manning the mountain radio base in Chch, I heard the plights of other parties similarly besnowed all over the lower SI. Finally the forecast they provided at 7.30pm each day suggested a clearing on Tuesday. 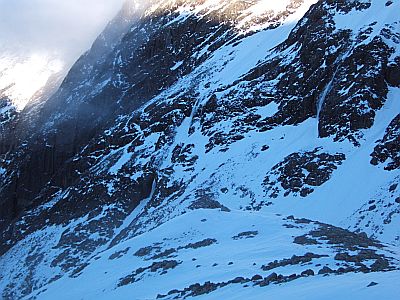 These powder avalanches are just pouring like water off Mt Harper, to my left. My route out is directly below. Later I was to see the debris--just where I had to walk out. This type of avalanche is pretty predictable, it snows, it builds up, especially on an existing snow loading and then it just comes down in streams full. It pours and pours for a couple of minutes. 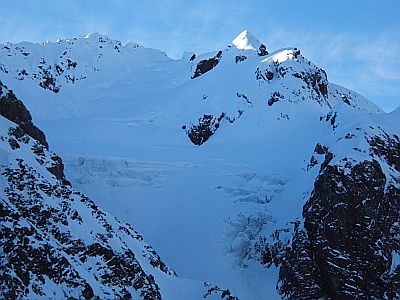 Then off to my right is this great hanging glacier--it just sort of hovers there above the hut, but across a valley. They apparently don`t move much, but when on the odd occasion that they do, you don`t want to be around at the time. Again my route out is directly underneath. 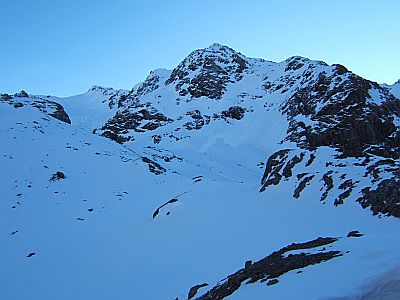 And during a brief clearing (photos are necessarily of the better weather, as I was tucked away in my sleeping bag during the other kind) you can see Mt Murchision the highest point in the park. 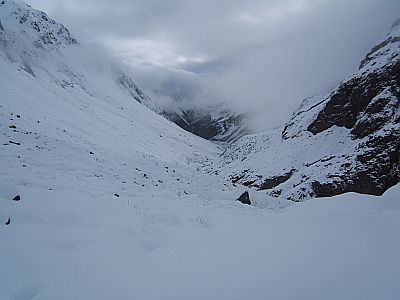 On the allotted exit day (after what has to be said to be a few anxious tossy turny nights) a misty but still morning arrived. I told myself that it was just high cloud and that we would drop out of it and headed off into it, early so as to avoid any straggling afternoon avalanches. Sure enough it cleared, and the wade out, being gravity assisted was easier. 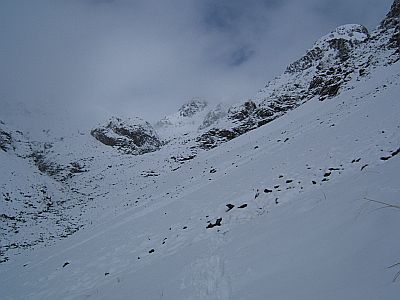 This time I took a high sidle approach and this proved to be a good move as some small measure of compaction meant some traction on the snow itself instead of punching right through into the rocks or tussolk. Where do bunnys go in a snow storm?   Answer: they make snow caves. 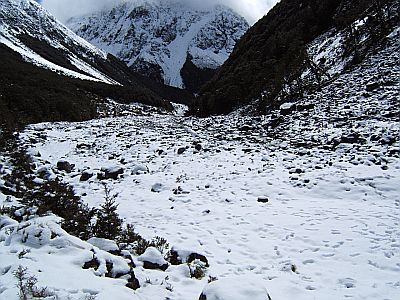 Eventually I hit the river and see that already the deer are out in force. This looks to me like some sort of deer conference! 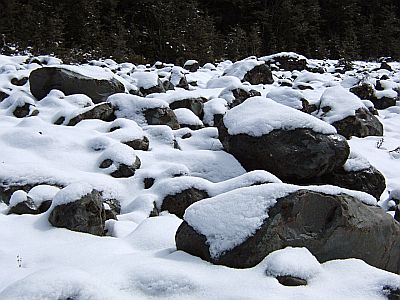 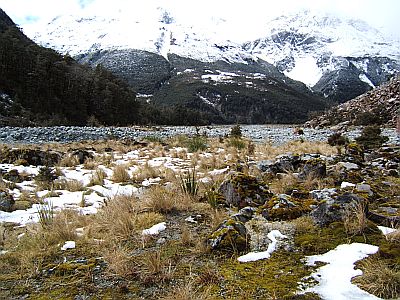 As the snow thins out and the valley emerges into the Waimac, the sun comes out some and the going gets pleasant. Im sure am glad to be back in the world outside Barker Hut. 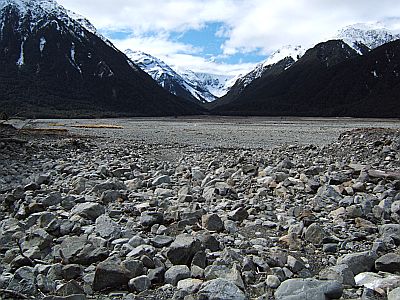 As for the Waimak itself its lost its blanket of snow and the walk down its length is like walking a whole other walk. Usually climbers refer to this walk as a trudge, just a thing to be endured on route to higher and grander places. Not for me, I really enjoy the big wide open spaces. 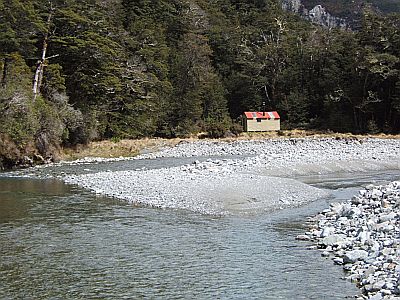 The sunny version of Anticrow hut. 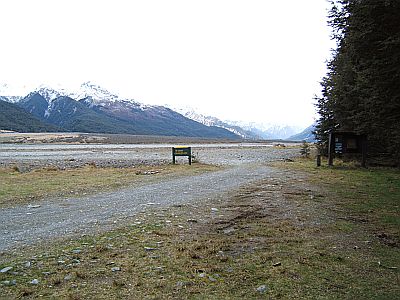 And back to the car park. I think im going to go find some valleys to walk in for a while. Suitable and appropriately sobered by the whole experience.