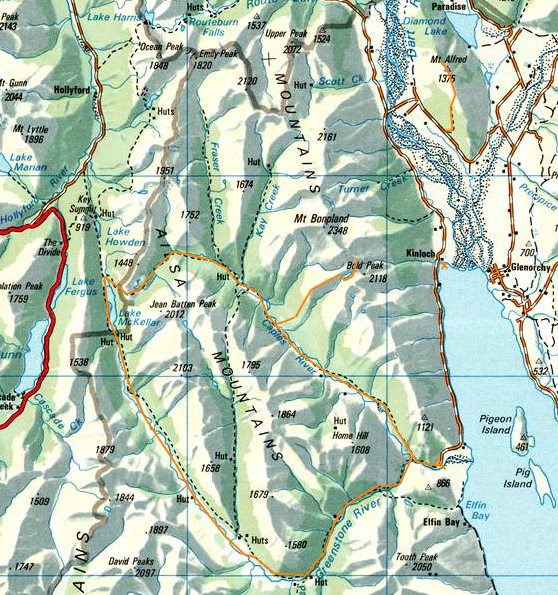 Side trip to sleepy hollow

I hadn`t intended to do Greenstone-Caples, but with the weather forecast being for rain all week, it was a good thing to do until I was able to do higher up routes in the Matukituki and Wilken area. 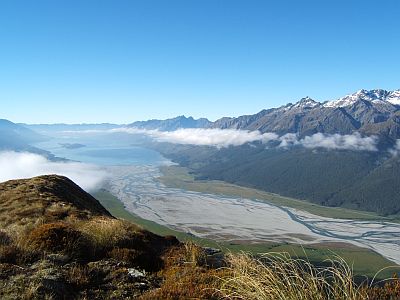 But before that, I made the usual early start and climbed Mt Alfred, which is near Glenorchy. The views from this peak have to be seen to be believed. It`s a steepish trek up until you are one full kilometre above the lake. You can see the marvellous braids of the Dart as it hits Whakatipu. If you want to know why so many Aucklanders are abandoning ship the scenery seen here might have something to do with it. 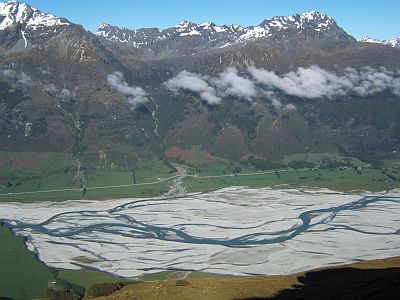 It almost looks plastic, and with 360 views you will be up there for quite some time on a good day. Make sure there`s plenty of space on your old memory card. 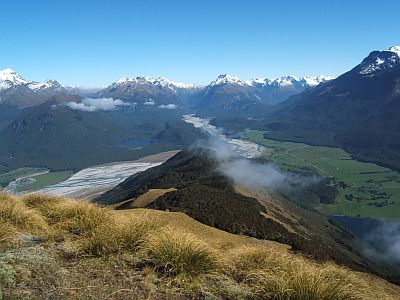 This is looking north. At left is the Route Burn (around here every second river is a burn, don`t ask me why), the Dart, Diamond lake at right and Mt Earnslaw at far right. The green area at lower right is marked on the map as a settlement called Paradise!

Theres a nice little DOC camp at Kinloch which is worth a night, and its just a short drive up a narrow dirt road to the Greenstone carpark. This walk is actually a readymade circuit, just fro a change. From the carpark I decide to go anticlockwise, up the Caples and returning via the Greenstone. 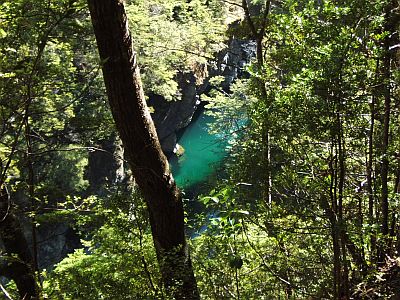 The track dips in and out of the bush which adjoins open grazed river flats. Periodically the Caples decides to cut rather deeply into some cool gorges, filled with crystal clear water. 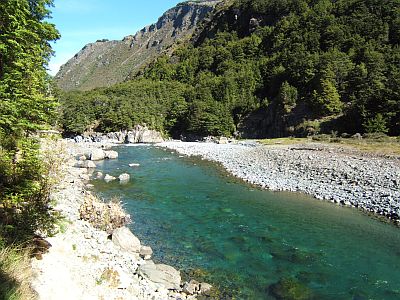 Theres no glaciers around here, hence the clean water. The cattle and sheep in the valley don`t seem to make much impression on the water quality (the area is outside the national park and is in fact owned by Ngai Tahu) 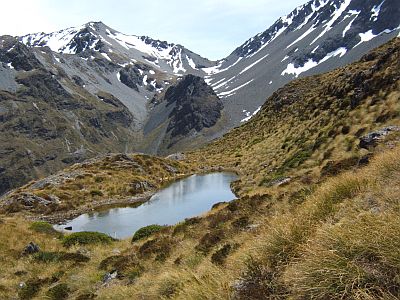 Before the weather totally craps out, there is one day of forecast clear. I use it climb up to a high alpine lake marked on the map as Sleepy Hollow. This is one of several tarns on the tussocky spur you climb on route. 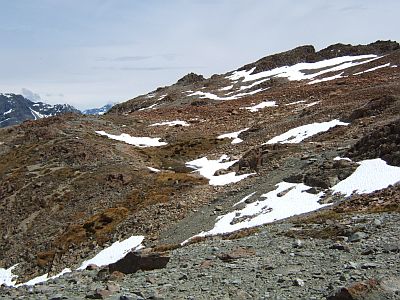 Up off the tossolk you hit this flat patch of red rock, which is actually geologically related to the Red Hills in Richmond area. I found out its called ultramafic rock, and its rich in certain minerals that also happen to prevent plant life growing. We are about 1700m here. 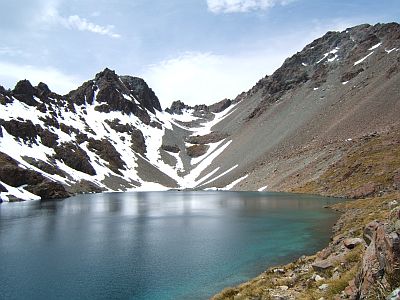 The lake is quite pretty, but ive got my eye on the col in the middle, there not being time to climb the peak at right (Bold Peak). 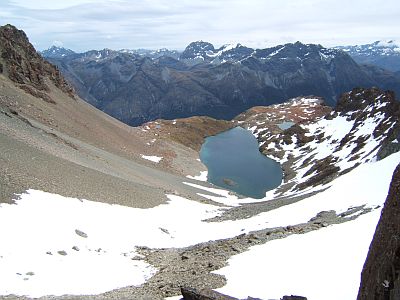 From the 2000m col the lake looks neat, with the Caples valley behind. The high point in the centre is Jean Batten which I had hoped to attempt. 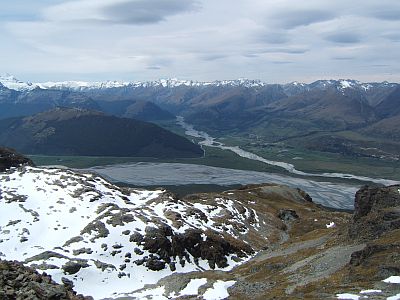 You can see both the Rees and the Dart rivers, and 1500m Mt Alfred is the largely bushy hill centre left. Note the hogs back clouds, which in the alps usually mean the approaching NWer will bring bad weather. At least wise they look pretty bloody similar to the ones that preceded 7 days of muck back in the Landsborough. 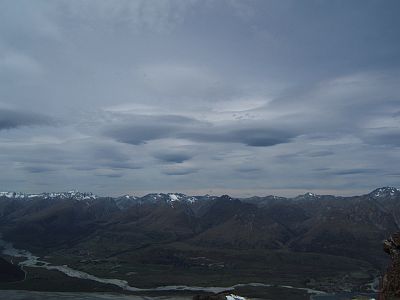 Yup, time to get out of here. Some of the route down the spur, before you hit the forest. 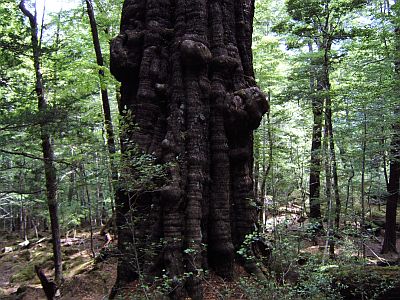 To and from the river you have to pass through the forest band, which fortunately is quite easy, as the beech forest is naturally open underneath, and especially so with stock roaming from time to time, um, supplementing their diet. As I was descending, going like a freight train (as you do), making split second decisions whether to go left or right around each tree, I suddenly came face to face with the matriarch of the forest. It was so wide that with the speed I was going neither left nor right was an option. I just had to simply stop. This tree, a Red Beech, has a width of 2 metres, and you can see the groovy flutes in the trunk. 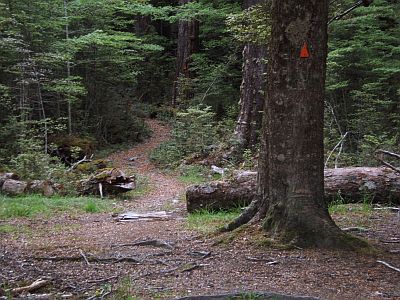 This image pretty much summarises the Greenstone Caples. While the valleys are quite open, the track is largely routed in the adjoining forest. Partly to keep wandering tourists away from the stock, and partly because the track is easier to maintain well away from the river. Nice if you like forest, otherwise... 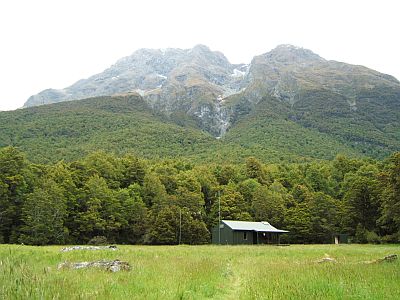 The Upper Caples like the other huts are located in clearings. Like the camouflage deep green colour scheme? 20 bunks, 80sish era id say. 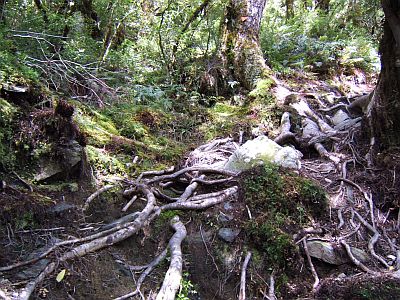 From Upper Caples there is the leg from hell over McKellar saddle. All the DOC literature refers to this trip as easy, and theres no mention about how rough this saddle leg is. Be warned. Basically the track is not formed or maintained, and it involves a protracted session of rock and root slipping and hopping. 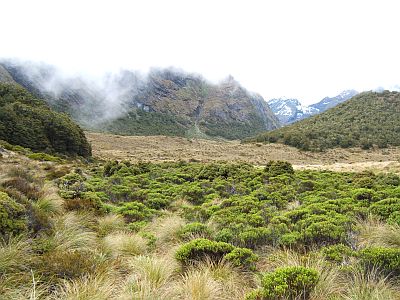 Eventually you pop out ever so breifly above the bush at McKellar saddle ( in the drizzle).Then the descent into lake McKellar (near the start of the Routeburn) is more of the same, but steeper. Not fun, especially when you aren`t expecting it.

I spend two nights at McKellar Hut waiting for the rain to work itself out. 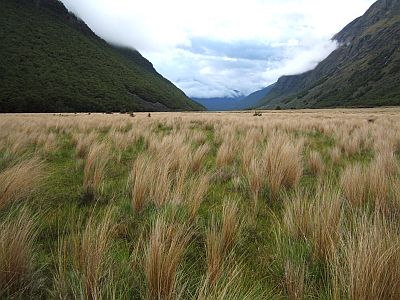 Then the next day its all the way down the Greenstone Valley ( to make up for my sloth yesterday). I know whats coming, I can see it on the map, and theres warnings in the route guide. A forest walk along side of a nice open valley. Therefore I abandon forthwith the track and go cross country. Um, it is a bit boggy here and there and does involve about 62 river crossings but, hey Im having fun. This little innocuous looking bridge more commonly found on side creeks, actually crosses the Greenstone, at a narrow gorge just before Greenstone hut, where I lunch. 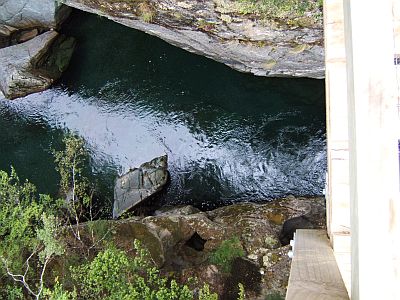 That`s looking straight down about 50m. The handrail is definitely non-compliant, and is wobbly to boot (loose bolts, NB DoC) 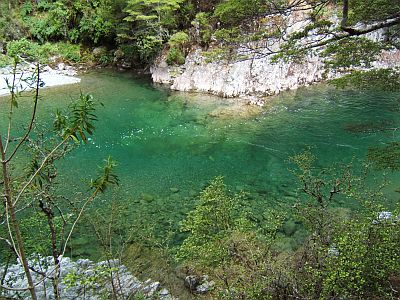 That`s the Greenstone River, and, much like the Arahura, its seems rather apt that its Greenstone coloured. This pool is 12 meters deep according to the fishermen, and you can see right to the bottom. I see several small trout swimming in the current. 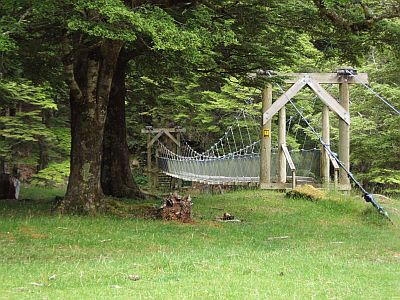 The standard Aspiring handmade timber swing bridge design. One of the old time rangers must have been an engineer. They do work better than the aluminium ones used in the NI, but I don`t know how long they will last.

That bridge recrosses the Greenstone and returns in due course to the carpark. The weather is still grotty and It seems clear that I wont have time now to do both West Matukituki and the Young,Wilken, East Matukituki, Albert Burn trip id planned. Life is tough.

After some thought and another look at the excellent forecasts provided at www.metvuw.com, I decide that the latter trip is largely low lying and therefore less interesting to me than the former trip which gets up into the high peaks near Mt Aspiring. So, West Matukituki it is.