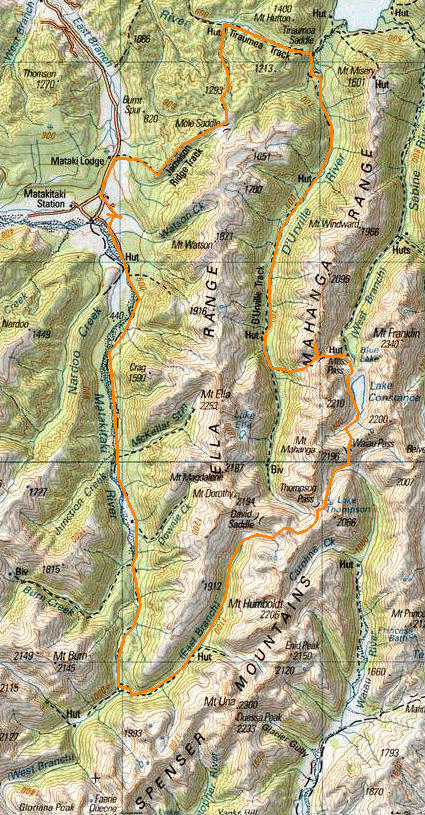 Packed with gear for 9 days, my pack feels just a bit heavy. The walk up the Matakitaki River looked promising open terain for those of us with minor forest aversions. The valley floor is part of Ella Station however the 4wd track up its length is just inside the forest on the west edge. Its muddy and unscenic and i tended to abandon it for periods and take my chances in the fine braided river. I philosophise that tracks are like motorways--made for folk in a hurry to reach their destination. But here the destination is the journey. 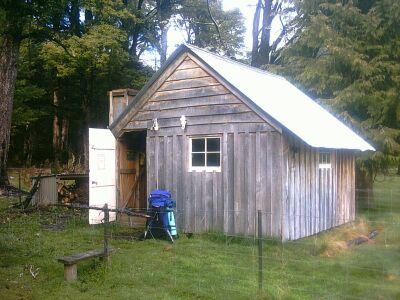 After about 4 hours you come to the historic Downies Hut. Id say it dates back to the depression judging from the `grafiti` in the hut. People told me that it had been `done up`. A bit generous in my view, saved from certain extinction would be more like it. The hut has that many holes it doesnt keep the wind, sandflies or bees out. It does have a new tin roof over the old shingle one. Its gloomy inside and thehuge open fire looks as smokey as they come. Historic or not, i reckon start again! 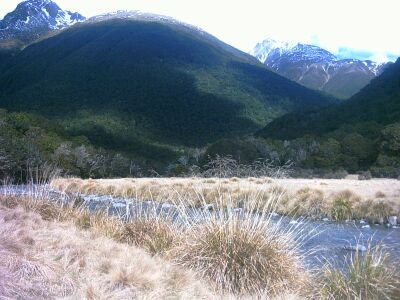 There are breif periods in the river when it opens out into tussolk flats. This is one just beofre the river forks into the East and West branches. Quite a few Kaka live in the forest around here, and there sceeching and bombing tactics are a mild distraction from the moody forest. 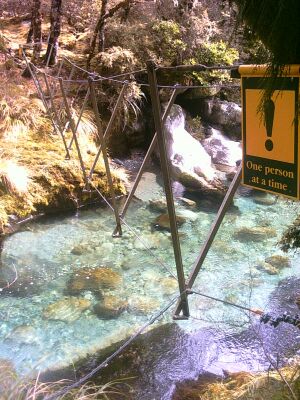 Walking in this terrain you get good at DOCs `bridges`. This particular specimen crosses the East bracnch to get onto the true left. From there its an hour or so up to the E.Matakitaki Hut, a 6 bunker situtated right on the riverbank. According to the hut book the river laps the hut door at times. It rained from 2 days while i was there waiting for a window to get over the passes. 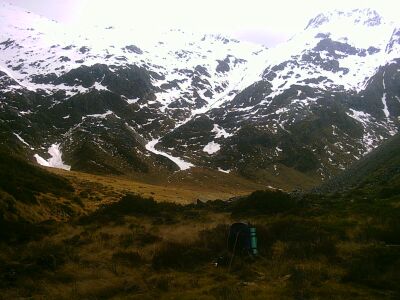 This is the headwaters of the E.Matakitaki, which is lovely country. You can see David Saddle in the centre, which is the most common route out fo this valley. It looks to be a narrow gut. 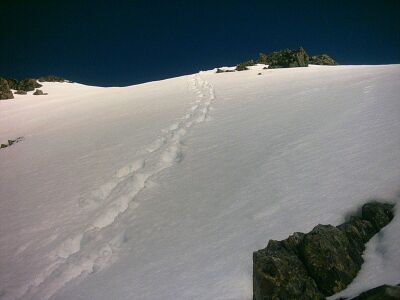 Its a fairly short sharp climb up into `unamed pass`, which is the more westurn and lower of two other passes out of the valley. This view is looking back up to unamed after id just crossed it in soft slushy snow conditions after the rain weve had. 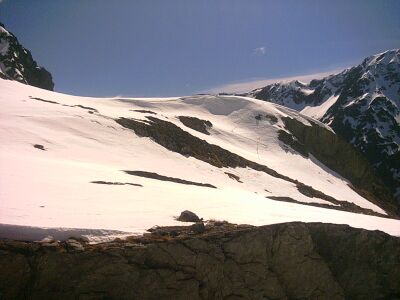 I saw a line of what i thought were footprints, but which turned out to be deer tracks. The pairs of feet tend to group into human sized clumps, and themore i looked the more i realised the tracks were everywhere. 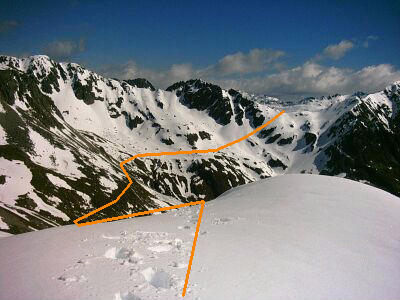 This image shows most of the traverse from unnamed to Thomson Pass, looking back from Thomson. You traverse at about 1500m on the slight shelf in the contours, with a 150m ascent and decent at each end. 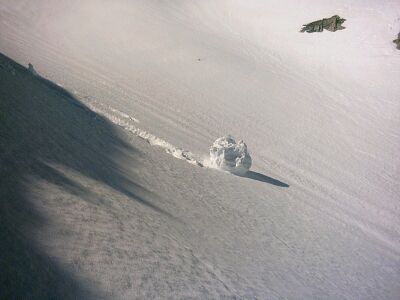 Yes, snowballs do exist in real life, not just in road runner cartoons This one had reached about 3 feet or so. 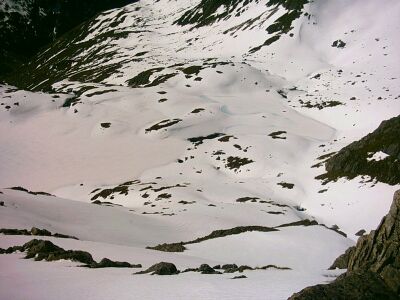 This lake Thomspon looking decidely frozen. Not really a pace id camp just now, although its where people traditionally do on this route to break up an otherwise long day. The shot is taken from the small pass to the SE of Thomson which is the preferably route, becasue it avoids the long rock rift below Thomson itself. 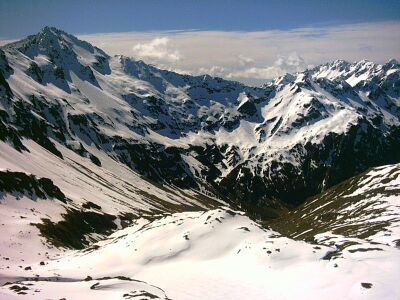 Looking from Thomson over into the Waiau you can make out Waiau Pass as the low point in the range. There is still a poled route up the ridge to the pass at around 1800m, which i had to climb at the end of a 12 hour day, and in 300m vertical meters of calf deep slush in the afternoon sun. Joy. I saw some Red deer in the head of the Waiau, up reaonably close. I see now why hunters often tease me about watching out with my hair colour. 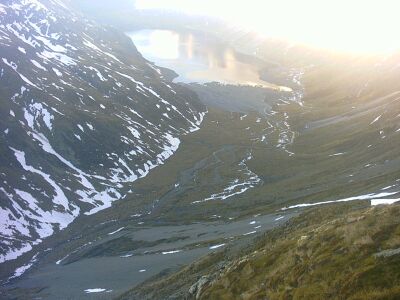 I started to have a number of real camera troubles on this trip. Basically the old 2MP camera im using is not really up the task. It will be a real pitynot to have decent hires originals to fall back on later--ill only get one shot at this trip. This is looking down from the steep scree descent from Waiau Pass into Lake Constance. There was a lot of avalnache damage to the track around Lake Constance and nary a marker pole in sight. After you trudge up about 150 vertical meters around the head of Lake Constance to avoid an offending house sized boulder preventing what would otherwise have been a pleasant lake side wander (get some dynamite please somebody) at the end of a tiring day you drop down into blue lake. Some say it looks like a possum. 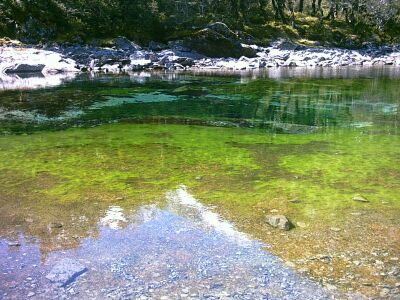 The water is incredibly clear becasue it comes out of the ground. You can see all the way to the bottom even in the deepest places. At 7.20pm, its basically dark, and im looking for the hut which is situated well away from the lake (and views). Out with GPS again and finally i flop down exhausted. 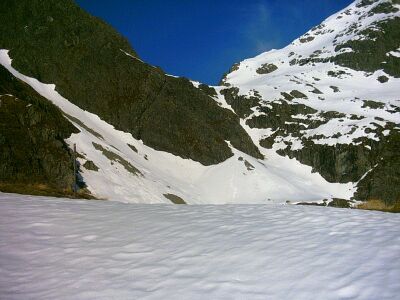 After a rest day at Blue Lake Hut (which BTW has no insulation, and so things freeze inside the hut overnight) and two very cold stary nights Id hoped that the previously horid snow conditions would turn nice and solid. They did, and making a 6am start over Moss Pass proved an excellent move. The pass is at uper right and only the last 100 vertical meters require crampons, where you have to negotiate a steep narrow snow gut. 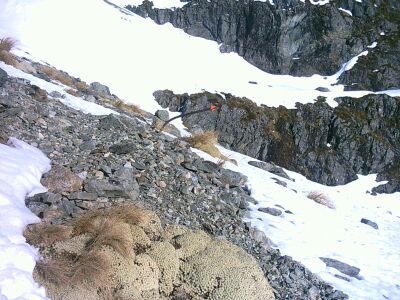 There are avalanches and heady natural forces in this area and the poles tend to get a bit beat up. 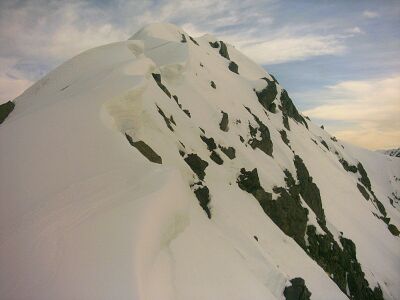 By this time my pack is getting substantially lighter and im feeling fit so i keep climbing and end up atop the peak to the north, point 2073, which has a great view of both the D`Urville and the Sabine. This shot shows the wind blown cornices on the very steep ridge up to the summit. I keep well back from them even thought they look solid. 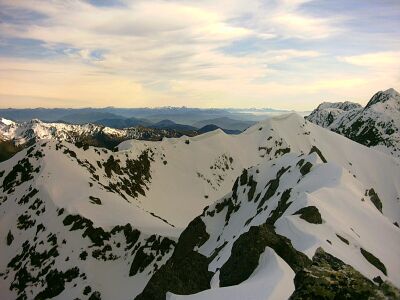 This is the view looking north from 2073. It looks like quite nice travel for a future high route along the Mahanga Range to Mt Misery. 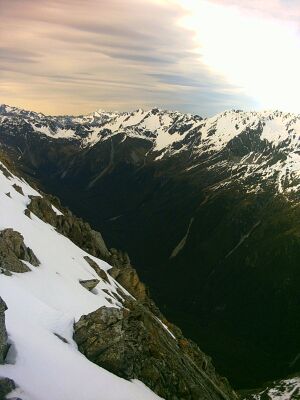 And this is looking south down the D`Urville valley. Note, as I did well the coming weather front. Time to get out of here and find a nice dry hut. Lucky i got an early start. 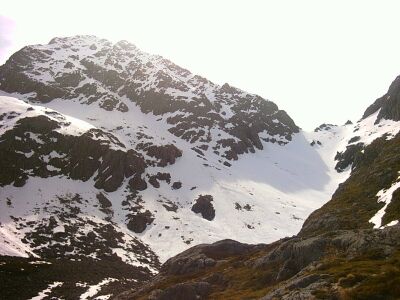 `My` mountain from the west, and Moss Pass is the obvious dip int he range. 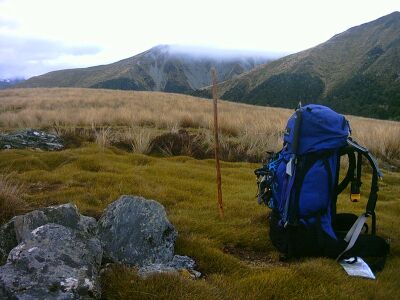 After a really cosy night and rest morning in the brand new Morgan Hut ( which has been moved somewhat south from where its shown on the map) i walked in the drizzle (again) down the D`Urville valley to near the outlet into Rotoroa Lake. Now this is a lovely valley. Its very flat bottomed and has numerous tussolk clearings, and the marked track occasionally drops right down into the river for a stretch of boulder hopping just to remind you you are walking in a river valley (unlike the Matakitaki where at times you cant even hear the river never mind see ro smell it). Old glacial valley Id say. Ill definately be back.   There a swarms of fisherman about, it being the first day of teh trout season. However there are not smiling because DOC are policing some fungal spread, telling most of them to go home.

From there its also a nice walk up tp Tiraumea Hut, which is a function little 6 bunker although not one treated too kindly by the young hunters who use it most. From there its a bit of a soggy spongy haul back up onto the open tops they call the Mole Tops, where i get to say farewell to the mountains that have been my home for 8 days. Again another timely break in the weather for the high travel. 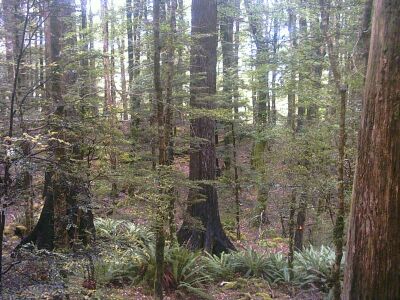 The walk down from the Mole tops passes through some nice examples (as they go) of Red Beech forest. Im going like a train and heading back to the milking shed where my car has been parked under the beady eyes of numerous milking gangs. And yes its still there. Always a relief. After a week im ready for a little civilisatiion in the form a couple of nights at the Murchison BackPackers where they have a computer which you can actually type on. Cool.