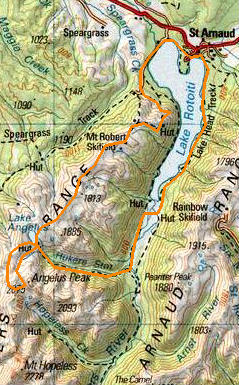 A lateish start leaving St Arnuard meant a nice cool climb up to Bushline on gathering dusk. This is the view north towards Muchison, down the Buller River which has its source in Nelson Lakes. And this is the view back towards town, and the lakes two bays near its outlet. A dramatic climb yeilds, as i came to learn, dramatic views. At Bushline, a really nice spot incidentally, there were a couple of tourists the first people ive seen in the parks so far. We played cards into the wee hours. The next morning the climb and traverse along Roberts Ridge gets snowier and snowier as you ork your wayalong the ridgetop.   Roberts Skifield appears to the no longer viable with receding snowlines each year. I think its going to close. This section of the walk walk s pretyy much alng the backbon of the range, and to the west is series of big snow basins filled with small tarns. Its quite pretty. 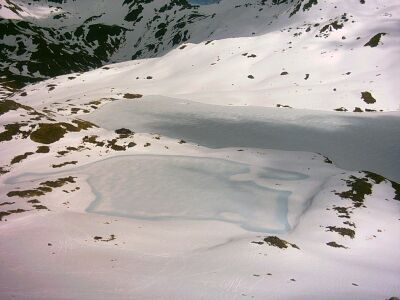 After about 4 hours you arrive on the rim of the basin surrounding Lake Angelus, and you just let gravity do the rest. I discovered the truth on this day of the teaching made on the snow craft course that the time to don crampons is when you start getting tired trying to maintain your footing in boots. Its quite a steep drop down to the lake.   The hut is on the spur between the lakes ,centre left. Its a big hut stained a rich goldy brown timber colour. It blends right in with the tussolk. Sleeps 30 or so. 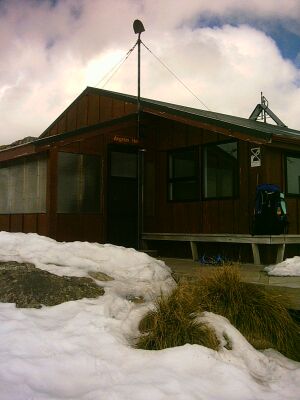 The hut has a nice solar conservatory, aka, entrance porch. Its a place to doff gear, but it has that double layered clear plastic polycarb stuff which means its cosy as. There is a sign on the door to leave the inner hut door open so the porch warms the hut. It must work because teh hut was warm when i arrived. Note also the shovel perched up high so you can dig your way in when the the hut is buried. ALso note the solar panel and radio mast. These are for the emergency radio. The hut at 1600m is one of the higher huts around. Kind of weird being the only person in such a large hut. The hut looks like its been extended so many times its one big series of leantos. Its not completely to my mind mind what holds the original box up because most of the walls are gone. The view from the expansive wrap around decking. The lake is surrounded by a rim of minor peaks. The weather is so very still that its almost alarming. 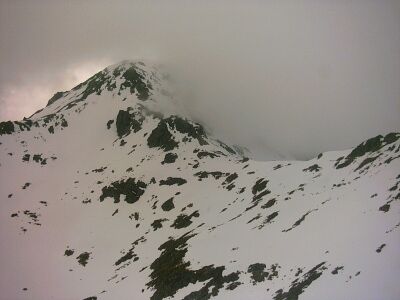 Next day i took off on an exporatory wander with a day pack. This view is looking from the Hinapouri tarn up to Mt Angelus and Sunset sadlle at right. Snow conditions were now very soft, knee deep everywhere except the flat, southern or windward slopes. This made for a tiring but improvisational climb up to Sunset saddle at around 1900m. Sunset leads over into Hopless creek. 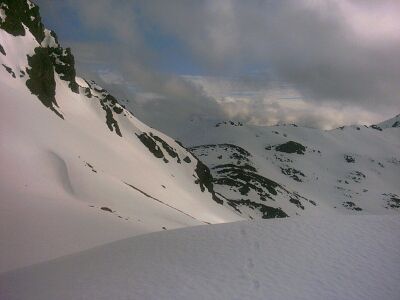 This is looking back down from Sunset to where id climbed, well plugged. Then i headed north along the ridge line climbing a few interesting peaks along the way. This is peak 1926, and i had fun on the steep icy windward slopes on its top and back--starting to get a real sense of what crampons can do. Here you can see the weather is starting to pack in. 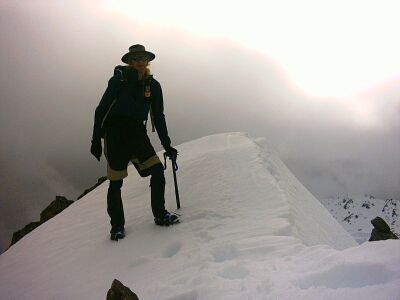 After my wander around and a quick slide back down to the lake, the coal range warms up the hut, sort of. Over night theres a lot of sleet and later new snow. The next day is spent `snowed in` doing some reading and gear repair. After that restful day and more snow the second night, i decided it was time to get out of here in case i really got stuck. After the intial steep section at the top of the Cascade track the rest is easy going forest walk back to town and creature comforts. Heres hoping my boots are ready, as the 39 dollar Warehouse specials i used for this trip were like wearing slippers, and they got very very wet to boot. I stayed at the Yellow House backpackers where the manager , a guy by the name of Trevor is also a climber. He has some good stories and advice.

And yes the boots are ready to pick up so I drive the 90 odd kms back into Blenheim to get them. Guess what, they are a different colour--bright orange, yay! Good on you Salomon for sorting this problem, i guess a product of yet another company who have taken their manufacturing to China.

One thing Ive learnt so far is that computer access is very restricted on the road. $8 an hour is commonly charged and mostly the machines are so locked down all you can do is email. If you want to do writing, websites or get photos off your camera, thats rare to be able to do. It looks like back to the stone age of postcards and letters, sigh.